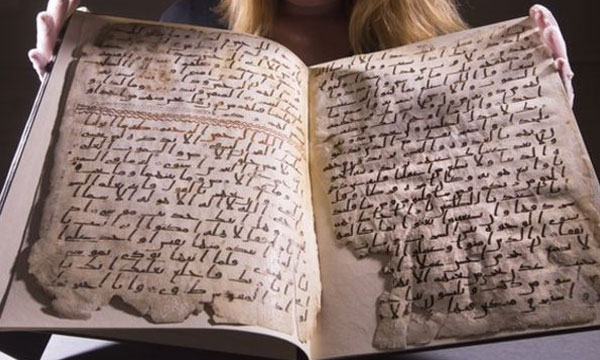 British Library experts at Birmingham University have found what could be the oldest copy of Quran manuscript that dates back to be atleast 1,370 years old. Radiocarbon tests prove the manuscript to be the oldest in existence till date.

Hidden from the experts’ eyes for more than a century, the manuscript was lost between a vast collections of Middle Eastern books. The British Library’s expert, Dr. Muhammad Isa Waley, termed this as “exciting discovery” that would make Muslims “rejoice”.

The extensive tests carried out by the Oxford University Radiocarbon Accelerator Unit, revealed the copy, written on sheep or goat skin. This hints that the parchment is from an era between 568 and 645. Dr Waley, curator for such manuscripts at the British Library said, “these two folios, in a beautiful and surprisingly legible Hijazi hand, almost certainly date from the time of the first three caliphs”.

The startling parchment discovery is a treasure invaluable to millions of Muslims around the globe. The University also plans to put the script on public display.