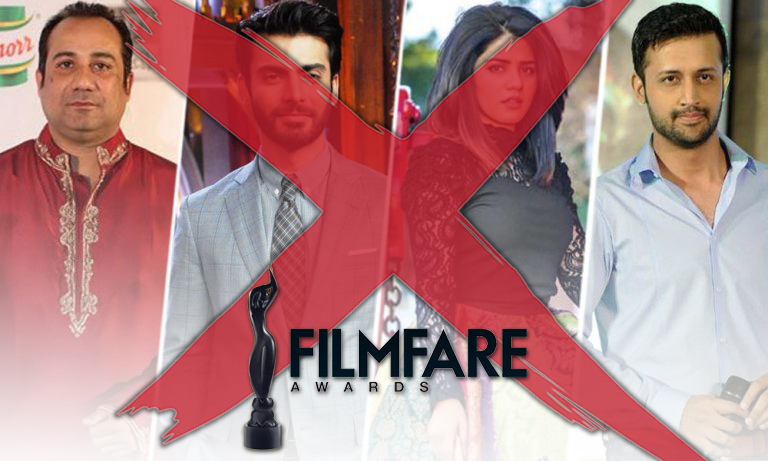 The coveted Filmfare Awards 2017 took place last night, as shocking as the nominations for the popular award show were the winners were not such a surprise to Pakistani fans. Nominations for Fawad Khan, Atif Aslam, Rahat Fateh Ali Khan and Qurat-ul-Ain Baloch came as a shock as they were named despite the on-going ban on Pakistani Artists in India.

None of the Pakistani actors or singers won any of the awards in the categories they were nominated in.

Fawad Khan would have won his second Filmfare for Kapoor and Sons while Rahat Fateh Ali Khan was also in line to win the Filmfare for the second time for the Best Playback Singer category for ‘Jag Ghoomeya’ from the movie Sultan. Atif Aslam has been nominated multiple times could unfortunately not bag the award this time. Both acclaimed singers lost to India’s Arjit Singh.

It came as no surprise to see that none of our Pakistani artists won as Bollywood extremists in India were protesting against the nominations. It was sad to see the Award Ceremony turning political instead of acknowledging the talented Pakistani fraternity.

Here’s the complete winners’ list for the Filmfare Awards 2017:

All eyes were glued to the social media feed that was being updated live from the Filmfare awards, an uproar rose after none of the Pakistani Celebrities were awarded in any of the categories they were nominated in.

As expected, Rishi Kapoor won Fawad Khan's award.💔💔Out of the cast it was Fawad and Ratna who were most deserving for awards. #Filmfare

We knew @filmfare wouldn't give it to Fawad after such hue and cry over his nomination. https://t.co/340XKNUGmM

Doesn't Matters If A Group Or Jury Doesn't Appreciates Your Talent!

You're Way Above Awards, Baby.💖
Your Talent Speaks For You! 😘
Shine! ✨ pic.twitter.com/ZncOZHPexv