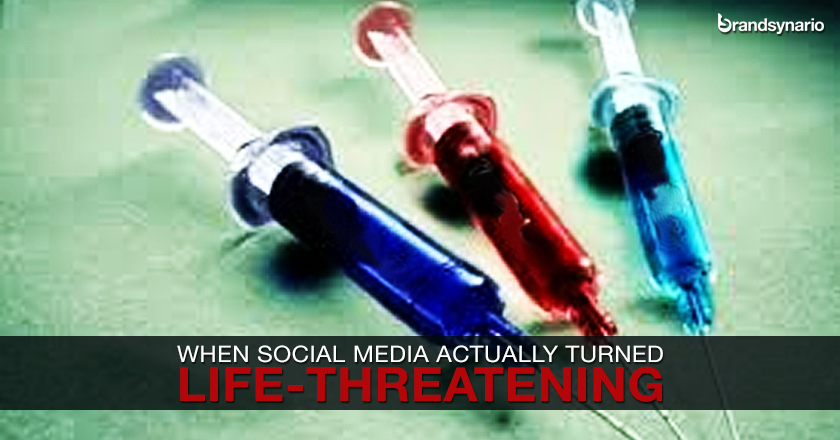 If there is one thing we all are thankful as well as regretful for, it is the boom of social media in the last decade.

Hate it or love it, you will have to admit that slowly and gradually we are becoming social media addicts who can not pass one minute without the access to internet.

But still we never thought that these social apps could cause deaths, did we? If not then think again because below are nine extreme cases of social media addiction that cost people their loved ones, their health and in some cases their very lives.

Texting seems harmless no, especially when it’s for free?

A 27 yeas old pregnant lady thought the same and ended up in hospital because she had severe pain in her wrists.

Reason: She sent loads of text messages on the app for continuous 6 hours and as a result her thumb could not bear the weight of the heavy phone. The Lancet medical journal concluded that it was bilateral extensor pollicis longus tendinitis of the thumb: in short, “WhatsAppitis”

2) Unsatisfactory Results of Selfies Made a Teenager Resort to Suicide:

Yes, some people are so particular about their selfies that they can kill themselves to gain perfection.

A 19 years old teenager, Danny Bowman attempted suicide by over dose of pills but thankfully he was saved by his mother. Bowman used to spend 10 hours taking selfies from his iPhone reaching up to 200 selfies per day. Bowman might not be only one with this obsession because researches have actually dclared Selfie – a mental disorder.

3) A ChineseTeenager Died at an Internet Addiction Rehab:

Grave, isn’t it? A Chinese teen, Deng Senshan passed away within one day after he was put into an internet addiction rehab by his parents presumably because of the harsh treatment by the teacher.

This trend is getting common in China where admission in internet addiction rehab is very common, however the strict style followed there is alarming. The clinic where Den was admitted has cured 5,000 internet addicts.

4) Teenage Ballerina Killed Herself Because Cell phone Was Not Given to Her:

Some teens can kill themselves if their wishes are not granted. For real!

Tallulah Wilson, a 15 years old Ballerina was seeking for refuge in an online world by creating an online cocaine addicted character.

This girl, who was bullied and was disturbed by the problems in her family, threw herself in front of a moving train after she was not granted permission to own a laptop, tab or a phone.

5) Teenager Got Run-over by Train as She Retrieved Her Phone:

We all love our phones without doubt but none of us would take the risk of retrieving it from a railway track especially with a train approaching.

The 14-years-old Jenna Betti however took this outrageous risk and paid a heavy price for it as she got hit by a train while reaching for her phone, which she dropped as she jumped away from the track.

This young Indian woman, Sushma Goswami started using Facebook and was hooked up almost instantaneously. Her brother also followed her and this irked the parents who responded by a scolding on this habit of hers.

Sushma got so heartbroken by this that she hung her self from a ceiling fan.

7) Woman Fell Into The Waters After Being Too Distracted by Facebook:

Bumping into people while checking out updates on phone seems reasonable.

This woman who was visiting Australia however took this distraction to a whole new level. Unaware of the things around her she walked off the St Kilda pier and fell into the chilly waters of Port Phillip because she was too engrossed in Facebook on her phone.

She was lucky that the water was shallow but to see her attachment with the mobile, it is visible that she valued her phone more because she clasped onto the phone until she was taken out of the water.

8) Man who lost his Job and Wife Because of Twitter:

People lose their social media circles after getting employed but with Larry Carlat, it is the other way round. Larry got so involved with Twitter that he lost his job as well his wife.

He tweeted tweets contrary to his job and when asked to choose one he chose Twitter. Later on his wife left him because of a tweet he posted about his negative feelings towards his wife. Later however he committed a Twittercide ie. he left Twitter for good.

Two young men lost their lives after excessive consumption of alcohol in a drinking game even though they had been warned.

The trend called, “neknomination” had two people making a film of each other having excessive amount of alcohol, doing some dangerous stunt and later nominating their friend to copy it in that drunk condition.

19-year-old Johnny Byrne was discovered afloat on the river and 22-year-old Ross Cummins was also found in a similar state at his house.

So it seems that internet can do bloodless murders and cause an imbalance in the lives of many but then again there is a limit to everything and had these young people controlled themselves many would have been still alive.

Think before you leap onto your phones, tablets or computers because you never know when you might become addicted.