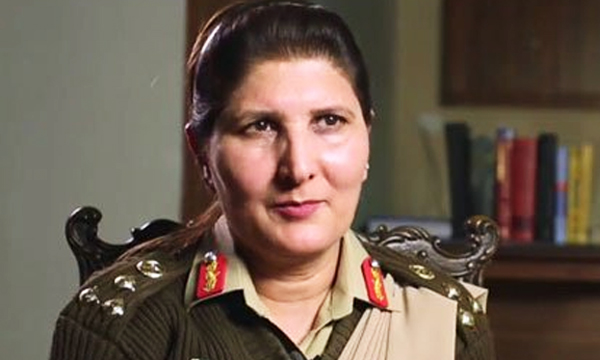 Brigadier Nigar Johar has now become the third female to join the ranks of Major General in Pakistan Army’s history. She was among 37 brigadier officers who were promoted to the position.

The Army Selection Board meeting was presided by the Chief of Army Staff, General Qamar Javed Bajwa which approved the promotions of the officers.

The Major General with her Colleagues. Nigar featured in a video by the Inter-Services Public Relations (ISPR) which was based on honoring women in the armed forces.

In the video, she says,

“Pakistan is my country and I was born here. I was raised here and I think there is no match to Pakistan to anywhere in the world,” she also added, “Think of all the Muslim countries, think of all those developing nations. This is the only country which has had two female general officers. No one else.”

Watch the Video to know more about Nigar Johar!

Johar hails from the Swabi district and belongs to the Army Medical Corps. Her father was also an army officer.

The first female Major General was Shahida Malick who was promoted to the rank in 2002. The Major also belonged to the medical corps.

We Just Found Look-Alike Of Talhah Yunus & We Can’t Believe It!