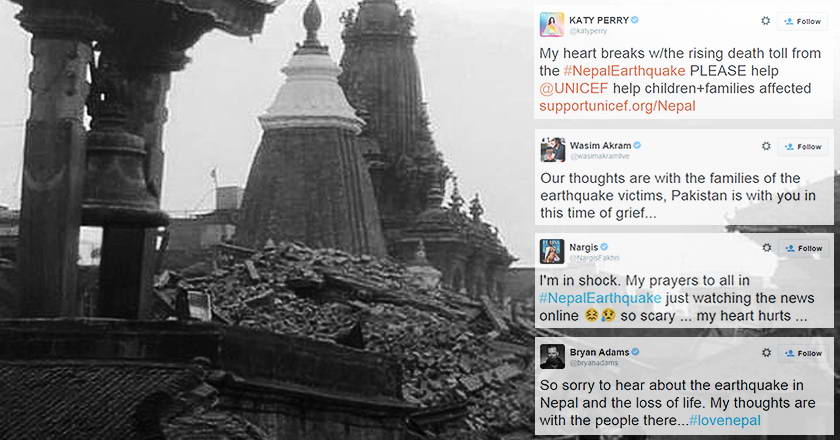 Doomsday has practically dawned upon the Nepalese, as the nation’s worst earthquake in 80 years knocked the magnificent Himalayan kingdom to become a land of rubble.

The catastrophic 8.7 magnitude quake rocked the Kathmandu Valley in Nepal, claiming the lives of more than 2500 humans and injuring more than 4000.

Celebrities from all over the globe took to the micro-blogging website Twitter with outpouring love and concern for the victims of Nepal’s earthquake.

Expressing their sympathy and solidarity with the survivors, stars worldwide are aiming to extend a helping hand to the people in Nepal to support them in their time of need.

So sorry to hear about the earthquake in Nepal and the loss of life. My thoughts are with the people there…#lovenepal

My thoughts are with everyone in Nepal. Sending my love.

Children & families affected by the #NepalEarthquake need your help. Text 864233 to donate $10 to UNICEF’s relief efforts; via @UNICEFUSA

To help those affected by the devastating earthquake in Nepal text: DONATE5 to 70008 and give £5. Thank you #NepalEarthquake @savechildrenuk

May Allah look after all. Here r the emergency contact numbers for Nepal,share, help. Prayers with all in Nepal. pic.twitter.com/PzZKBADMbD”

I’m in shock. My prayers to all in #NepalEarthquake just watching the news online 😖😥 so scary … my heart hurts …

Our thoughts are with the families of the earthquake victims, Pakistan is with you in this time of grief…

Tragic stuff. We shld all do what we can, charity, dua, donations etc #PrayForNepal pic.twitter.com/l0mValoHUu

We pray for the thousands who passed away and many more who lost their homes in Nepal. May God give them strength and peace #NepalEarthquake

So sad to hear about more aftershocks in Nepal. A real tragedy has befallen this little humble Himalayan kingdom. God bless them !

I pray for the 1000 plus lives lost today in the #NepalEarthquake . May safety & peace be with u.