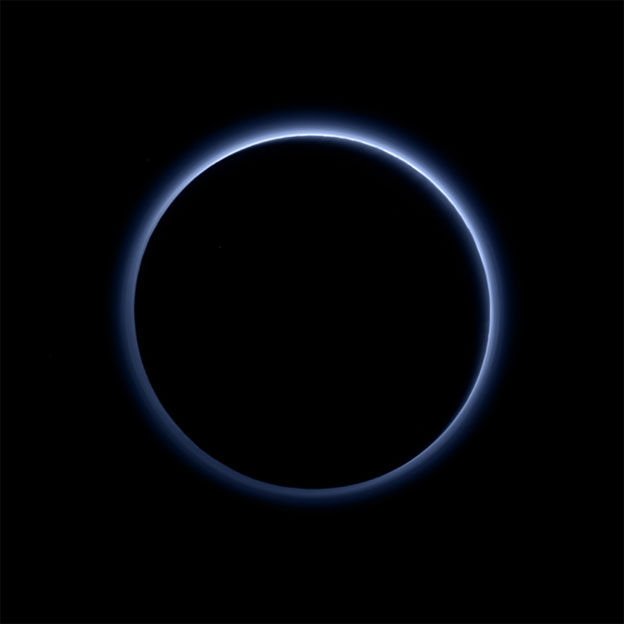 Pluto has a blue sky. NASA shared this remarkable discovery  when the New Horizons spacecraft which is currently 3.1 billion miles (five billion kilometres) from Earth, sent pictures of the dwarf planet on earth.

As the Pluto has a thin atmosphere, the blue sky (seen from the photo) is more of a haze. Haze particles usually appear either red or grey to the naked eye, but they scatter blue light in such a way that blue sky is formed – the sky we see early in the morning on earth. The cobalt blue tint reveals more about the size and composition of haze particles.

“A blue sky often results from scattering of sunlight by very small particles. On Earth, those particles are very tiny nitrogen molecules. On Pluto, they appear to be larger — but still relatively small — soot-like particles we call tholins.” NASA quoted in a press release.

Another significant finding is ‘water ice’ which also appears red to the human eye. “I’m surprised that this water ice is so red,” says Silvia Protopapa, a science team member from the University of Maryland, College Park.

Scientists are still struggling to understand the relationship between water ice and the reddish tholin colourants on Pluto’s surface.

The images of Pluto captured by NASA’s New Horizons spacecraft exposed regions of water ice that covers most of the dwarf planet. “Large expanses of Pluto don’t show exposed water ice, because it’s apparently masked by other, more volatile ices across most of the planet,” Southwest Research Institute science team member Jason Cook said in the statement.

Understanding why water appears exactly where it does, and not in other places, is a challenge that we are digging into.”