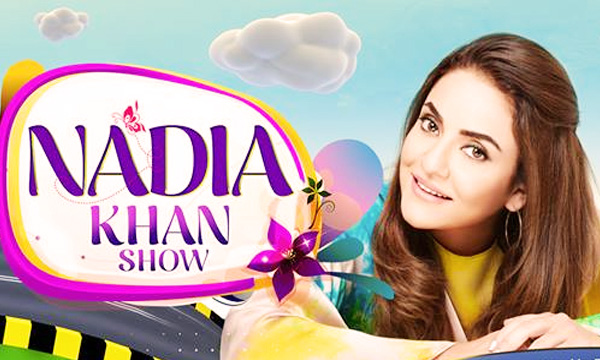 The cheerful and bubbly, Nadia Khan has returned to GEO TV to brighten our mornings once again with the much-entertaining ‘The Nadia Khan Show’. The show airs every morning at 9.00 am on GEO TV and with her today is the handsome and much talented Shamoon Abbasi, accompanied by the rising star, Zainab Jamil.

She follows the same pattern of calling in celebrities as guests and wishing birthdays in her unique ‘Happy to You’ style.

The guest on NKS today is Shamoon Abbasi being candid on the show; he openly talked about his troubled marriages and how his father now wishes him to be married to a “ghareloo” girl. He discusses the problems he had faced with his former wives Javeria Abbasi and Humaima Malick! The other guest on the show is the much-talented and equally beautiful, Zainab Jamil. She stars in a popular drama serial, Sada Sukhi Raho on GEO TV! The actress is also a host and a model. The show is filled with fervour, laughter and energy! Wasif and Maddy tell us about fitness and health and just be their usual selves!

Keep watching the Nadia Khan Show from Monday to Friday at 9.00 am only on GEO TV.

Keep watching the Nadia Khan Show from Monday to Friday at 9.00 am only on GEO TV.