Home More Viral #MuslimApologies – 10 Tweets that Explain What Muslims Should be Sorry for!
Advertisement 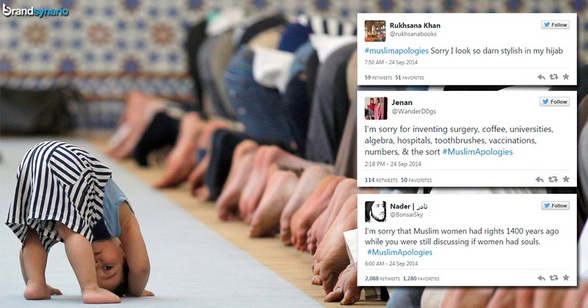 The commonly deducted factor from the above mentioned global tragedies is a religion – Islam and if the history we know has even a slight shred of honesty then the guilty has a lot to pay for!

But the question stands – Do 1.6 bn people have to be accused, blamed and harassed each and every day for the unfortunate actions of a few brainwashed minds? Do they have to defend their lifestyle, culture and behavior every time they profess their religion?

A brilliant way to answer these questions and to vent out the frustration on being blamed for everything and nothing, Muslims around the world took their heart out to Twitter and the result, ironically, told a tale of deeply rooted doubts and stereotypes.

Muslims took to Twitter to express their weariness over repeatedly having to apologize for atrocities committed by Islamic extremists, sparking the Twitter trend #MuslimApologies.

While some tweets highlighted the revolutionary inventions and contributions Muslims made to the world, others were just harsh facts of an ordinary Muslim’s life.

Here are some of the best Tweets from the #MuslimApologies:

I’m sorry the founder of the world’s oldest university was a Muslim women in 859 (Fez, Morocco): Fatima al-Fihri #MuslimApologies

As a Muslim I apologies for the World War One & World War Two even it has nothing to do with the Muslims but just in case. #MuslimApologies

I’m going to just wear this shirt every day from now on. #MuslimApologies pic.twitter.com/EuKG20tNXP

I’m sorry we invented the concept of zero, thereby giving others a way to describe you. #MuslimApologies

On the lighter side of the arguement:

#muslimapologies Sorry I look so darn stylish in my hijab

I apologise for the Twilight Saga #MuslimApologies

I’m sorry they killed the whole Stark family in Game of Thrones ?? #MuslimApologies