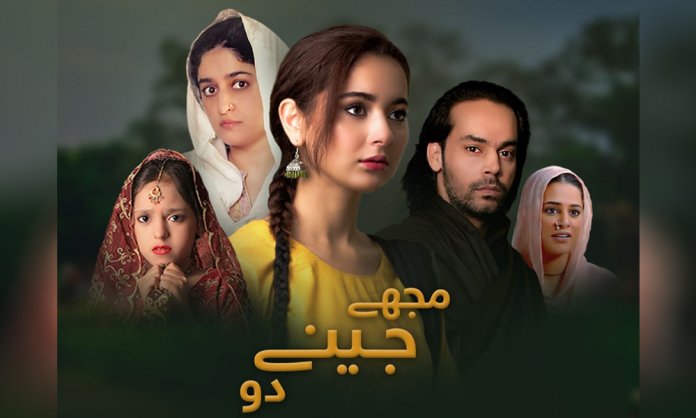 Mujhay Jeenay Doh, the latest addition to the ongoing list of social drama’s, aired its first episode last night on Urdu1. And as expected, it kick started with a pretty strong beginning.

It is directed by Angeline Malik, and penned down by Shahid Nizami. For those who are unaware, this drama revolves around the issue of child marriages in Pakistan and how this disease continues to rise despite having laws against this god-awful crime. The project features the finest actors of Pakistan’s entertainment industry; the brilliant Nadia Jameel, Gohar Rasheed, Mahreen Raheel and Sarmad Khoosat along with the rising stars like Hania Aamir and Sabeena Syed with the little Emaan Sher.

The first episode opened to Saira played by little Emaan, who is shown joyfully getting ready for the wedding of her doll. Being a child, she was fascinated with the idea of “Marriage” as a whole. This scene foreshadowed her being married off to Naseeb (Gohar) pretty soon.

The drama also showcases the plight of women in the village who survive physical abuse. Sarmad Khoosat being Mahreen Raheel’s husband is violent and disrespectful towards her.

Mujhay Jeenay Doh Give us your feedback on tonight's episode. #MujhayJeenayDoh #Urdu1

Meanwhile, Nadia Jameel plays the role of a healer of sorts in the village.

The role of Emaan’s sister and Naseeb’s wife is played by Sabeena Syed, a relatively new face who made her television debut with Yakeen Ka Safar on Hum Tv.

Naseeb seems to be madly in love with his wife Bushra (Sabeena), but little did they know that their happy world is soon to be torn apart!

Well, a tragedy created a havoc in the lives of Naseeb and Saira.

At first, it was all hunky dory for everyone but then Bushra loses her life while giving birth. It was heart-wrenching to realize that Bushra’s case is the story of thousands of women who reside in the village and die because they do not get proper aid at the time of their child’s delivery.

After that tragedy, Saira is forced to get married to Naseeb, her brother in law.

This drama sheds the light on various matters of concern happening all around Pakistan, whether physical or emotional. It tells us how lives of young souls are being ruined in the name of traditions and customs and how we all as a human should fight against them.

We can’t wait to see how the strong willed Saira will cope up with these ups and downs in her life. Emaan, although is a child, but her portrayal of Saira leaves us asking for more. Gauhar Rasheed, as usual, left no stone unturned to portray his character.

The drama airs every Monday at 8 pm only on Urdu1.