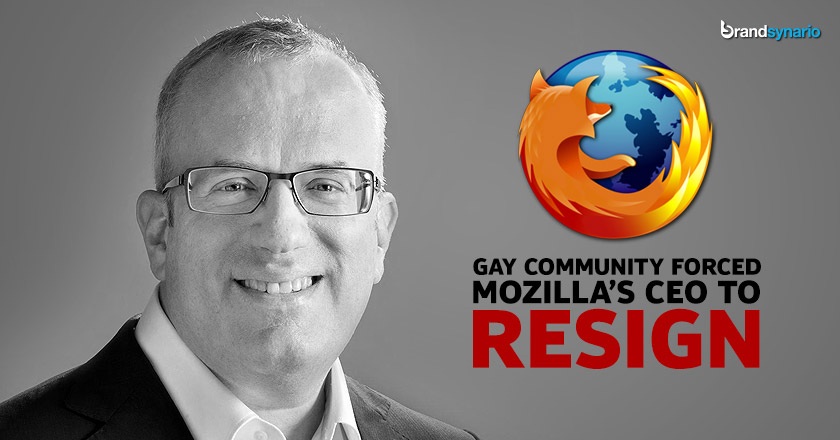 Brendan Eich, the creator of JavaScript has stepped down as Mozilla’s CEO due to severe criticisms that he received for his support towards anti gay-marriage act in California.

“Brendan Eich has chosen to step down from his role as CEO. He’s made this decision for Mozilla and our community.”

Brendan took over as the non-profit organization’s CEO on 24th March, after a short while of which Brendan was publicly urged to step down from the role, as a result of donation that he previously made to a 2008 anti-gay-marriage proposition in California.

Though it didn’t get much serious until OkCupid, the free online dating site posted about Brendan’s act from the past to make it go viral.

“Mozilla’s new CEO, Brendan Eich, is an opponent of equal rights for gay couples. We would therefore prefer that our users not use Mozilla software to access OkCupid.”

This attracted a lot of attention towards Brendan’s donation, causing a stir in Mozilla’s management. Later on, in an interview to CNET his contradictory remarks added fuel to the burning fire.

“It may be challenging for a CEO, but everyone in our community can have different beliefs about all sorts of things that may be in conflict.”

The issue might have gained a lot of attention, as of which Mozilla along with its CEO had to decide against the statement, while calling for a voluntary step down from the CEO himself along with whom Mozilla’s three board members also resigned, after which Mozilla Baker mentioned an apology in her blog post, stating,

“We didn’t act like you’d expect Mozilla to act” adding further on, “We didn’t move fast enough to engage with people once the controversy started. We’re sorry. We must do better.”

The full statement from Mozilla on the issue stated:

“Mozilla prides itself on being held to a different standard and, this past week; we didn’t live up to it. We know why people are hurt and angry, and they are right: it’s because we haven’t stayed true to ourselves.

We didn’t act like you’d expect Mozilla to act. We didn’t move fast enough to engage with people once the controversy started. We’re sorry. We must do better.

Brendan Eich has chosen to step down from his role as CEO. He’s made this decision for Mozilla and our community.

Mozilla believes both in equality and freedom of speech. Equality is necessary for meaningful speech. And you need free speech to fight for equality. Figuring out how to stand for both at the same time can be hard.

Our organizational culture reflects diversity and inclusiveness. We welcome contributions from everyone regardless of age, culture, ethnicity, gender, gender-identity, language, race, sexual orientation, geographical location and religious views. Mozilla supports equality for all.

We have employees with a wide diversity of views. Our culture of openness extends to encouraging staff and community to share their beliefs and opinions in public. This is meant to distinguish Mozilla from most organizations and hold us to a higher standard. But this time we failed to listen, to engage, and to be guided by our community.

While painful, the events of the last week show exactly why we need the web. So all of us can engage freely in the tough conversations we need to make the world better.

We need to put our focus back on protecting that Web and doing so in a way that will make you proud to support Mozilla.

What’s next for Mozilla’s leadership is still being discussed. We want to be open about where we are in deciding the future of the organization and will have more information next week. However, our mission will always be to make the Web more open so that humanity is stronger, more inclusive and more just: that’s what it means to protect the open Web.

We will emerge from this with a renewed understanding and humility — our large, global, and diverse community is what makes Mozilla special, and what will help us fulfill our mission. We are stronger with you involved.

Thank you for sticking with us.”