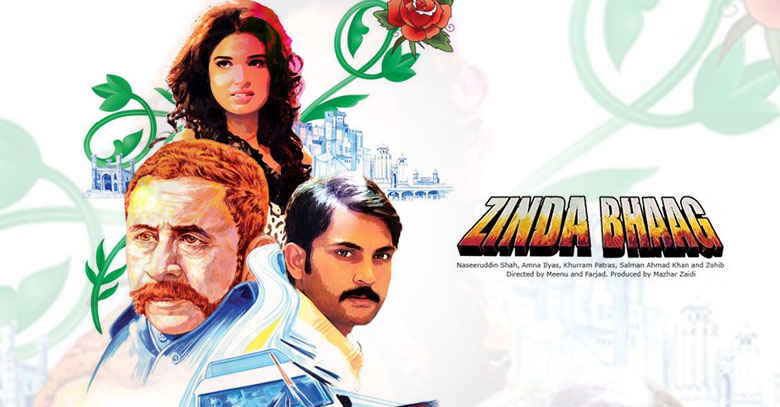 Pakistani cinema is back with a bang – one which can be heard throughout the nation and abroad. Recently a trailer of Zinda Bhaag (Escape Alive) was featured on various websites and resonated quite well with the audience.

Zinda Bhaag is a comedy packed thriller directed by Meena Gaur and Farjad Nabi. The movie comes straight out of the mohallas (communities) of Lahore and captures the lifestyle of young Lahoris. The trailer suggests that the movie revolves around the life of three friends, their attempts to settle abroad and the intense drama associated with it.

The director duo Meena and Farjad are confident about their project as they feel that their work represents the emotions and stories of the local audience.

“We feel that when audiences will watch this film in Toronto or Sydney, they are bound to say ‘this is my story’. We are constantly surprised when people come to us after a preview screening and share their own stories. It is a very moving experience,” Nabi and Gaur expressed their motive behind the movie and commented on the first impression of the movie.

The cast of the film includes fresh Pakistani talent, but the highly skilled Naseeruddin Shah, won the hearts of the audience by creating a brilliant character on-screen.

Naseeruddin Shah sports red hair and beard with a heavy Lahore accent and graces the opening scene of the trailer with the phrase “Dekho gee Saray kandenay, jo Lahore Ni vikhiya who jamiya nai” (“Everybody says this that he who has not yet seen Lahore, has not been born!”).

As far as the music is concerned, its album jumped to 140 from 225, in one day, on iTune’s charts on August 25. Zinda Bhaag includes rendition, sung by Abrar-ul-Haq, of Pakistan’s first ever rap song ‘Paani da Bulbula’. It was originally sung by Yaqub Atif Bulbula and it became a massive hit amongst youth in the 60s.

This is bi-lingual project is the mix of Punjabi and Urdu. The language is raw and it successfully manages to re-create the experience of Lahore on the big screen. The trailer has sparked interest among the younger audience and is becoming talk of the town.

Even before its release in Pakistan, Zinda Bhaag has won four major awards at the Mosaic 2013 (MISSAF) festival in Toronto which is Canada’s largest South Asian event.

It won the prestigious best film award. Amna Ilyas and veteran actress Naghma Begum bagged the best actress and the best supporting actress award respectively. While Sahir Ali Bagga won the award for the best music/soundtrack for his work.

Zinda bhaag promises a fun filled experience wrapped in fresh Pakistani packaging and the magic of Naseeruddin Shah who never fails to impress.

The social media discussions suggest that people are eagerly looking forward to it and some have even claimed it to be a blockbuster. The movie is expected to release on 6th September, so clear your schedules because this is a must watch.