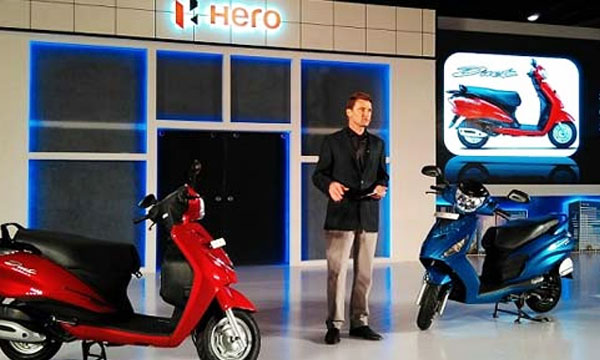 Auto giant Hero unveiled a new $125 million design centre in India Thursday, complete with 10 miles (16 kilometres) of test track and giant 3D printers, as it seeks to cement its status as the world’s top-selling motorbike manufacturer.

The opening of the facility on the outskirts of Jaipur comes as part of a rapid expansion by a company that sold more than 6.6 million bikes last year and is about to start exports to Nigeria.

Chairman Pawan Munjal said Hero was now selling its low-velocity bikes and mopeds in nearly 30 countries and had set itself a target of 10 million annual sales by the end of the decade, despite a recent tail-off in the Indian market.

“My dream has been to make this company the world’s number one company in the field of two-wheelers — not just in numbers, which we are now,” Munjal said at the inauguration in the northern city.

Set on 247 acres (100 hectares) of scrubland, the site features a network of 14 different test tracks and includes 45 different types of road surfaces.

The total cost is estimated at 8.5 billion rupees (around $126 million).

The research centre includes zones for every step of the design process, including workshops where clay models and then prototypes of the bikes are crafted, and laboratories where endurance tests are conducted.

While cameras were barred from the research centre, journalists were shown giant 3D printers that engineers said were among the largest in the world.

Markus Braunsperger, the company’s German chief technology officer and former BMW employee, said the facility was rare because it included such extensive testing facilities on the same site where the bikes are designed.

He added that the 500-strong engineering workforce had been hired with an eye on ensuring their skills could meet world-class standards.

The increasing gridlock on India’s roads has been a major factor in fuelling the appetite for motorbikes in the world’s second most populous market.

Hero, which split from long-time partner Honda around five years ago, has emerged as the market leader by selling models with prices that start at less than 40,000 rupees ($600).

Its main overseas markets are in Latin America and Africa, where two-wheeled vehicles are often the best way to overcome rush-hour logjams.

“We are in 26 to 28 countries already. This month we should be starting in Nigeria and very soon we should be going into Mexico,” said Munjal.

The chairman, whose late father founded the company in the 1950s when it made bicycles, acknowledged there had been a slight dip in the Indian market.

“The market in India right now is not at its best. We are hoping that things will get better, especially in the rural sector,” he said.

Braunsperger said India would remain “its bread and butter” market and Hero’s challenge was to meet the aspirations of what is due to be the world’s biggest country within a decade.