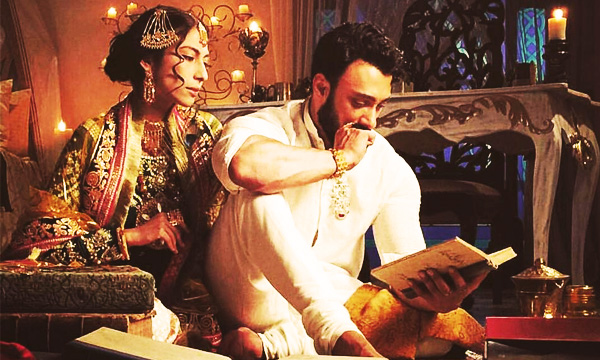 Geo TV has announced 24th April, 2016 as the launch date for the most anticipated TV fantasy drama serial of the year; Mor Mahal. ‘Mor Mahal’ is an upcoming drama serial on Geo TV, that shows the epic fantasy set of Mughal era, dated 200 years back with the culture and lifestyle of royals has been unveiled recently. The serial stars the handsome Umair Jaswal and beautiful Meesha Shafi in the leading roles in this masterpiece.

The serial stars the handsome Umair Jaswal and beautiful Meesha Shafi in the leading roles in this masterpiece.

Directed under the banner of Sarmad Khoosat, produced by AnB production and written by Sarmad Sehbai, the drama serial Mor Mahal is based on the epic story of sub-continental royal history dated 200 years back (16th and 17th century) that explores their culture and lifestyle trends. Listen to the OST of Mor Mahal Drama below:

Check out the early teaser of the drama serial.

Meesha Shafi disclosed the first look of the serial on her Instagram account. The actress while captioning the drama explained the plot and view of Sarmad Khoso’s direction.

She said, “A groundbreaking, revolutionary period drama, an epic fantasy set 200 years back, exploring the culture and lifestyle of the subcontinental royals of centuries past.”

Returning back after seven whopping years, Shafi said, “When everyone was doing TV I ventured into films. Now when everyone is doing cinema I’m going to be on the telly. What can I say….. I like swimming against the current.”

Check out some backstage images of the actors giving a smoky yet dignified look by being dressed up in trendy clothes and heavy jewels exclusively designed by Zaheen Kamran.

Here is the attraction teasers of the drama serial Mor Mahal

Don’t miss it and stay tuned to Brandsynario for more updates!