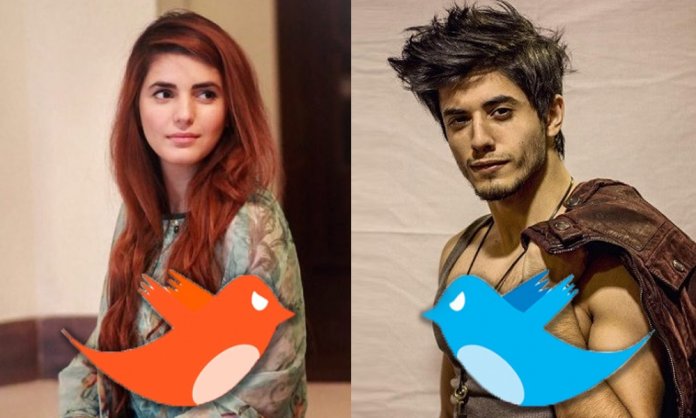 Whoa! You will not believe what is happening on Twitter! We all know that Momina Mustehsan and Danyal Zafar are ‘best-friend goals’ however, something has stirred a war between both superstars!

Both of them took it to Twitter to blow off the steam! We dug a bit deeper into the conversation to try and figure out what has turned these 2 besties against one another overnight, and you will not believe what the topic of the war is!

The desi loving ‘phataka kuri’ Momina and the ‘angrezi’ fast-food loving Danyal are having a digital food fight!

Ladies and gentlemen, to the right we have our Afreen Afreen girl, foodie #1, who is a die-hard food-fan to her core! She loves to munch whether day or night and enjoys the ‘tarka’ which food adds to her life! Western food makes her very sad! To the left, we have our handsome hunk, foodie #2, who is also a foodie! He prefers the non-desi, also known as ‘vilayti’ food lover with all herbs, garnishing, and basically everything which has nothing to do with the desi factor! It all started when Danny boy tweeted his feelings about desi food using #DesiNoMore!

Had too much desi food this Eid – going to grill some burgers today. #DesiNoMore

Woah! Made it better than even I did! Mind sharing some!? https://t.co/xfF6UjkZAy

Being a die-hard foodie, Momina couldn’t take it anymore, she got back at him using #DesiRocks!

@DanZafOfficial NO SCENE – Nothing can come close to some Seekh Kebabs. Desi forever! 😻#DesiRocks pic.twitter.com/t8pbVNByo2

She continued to troll him!

Danny was not ready to admit defeat!

If you thought that the war could not get any more interesting than it has already, you were wrong my friends! The war between both the foodies has divided our favorite celebrities! While some agree with Momina and have joined team #DesiRocks the others have team-up with our handsome hunk Danyal to form team #DesiNoMore!

@MominaMustehsan you my desi girl! Bring on that desi tarka! #DesiRocks

How would you eat your prawns? In a sad desi salan or a kickass tuscan sauce? #DesiNoMore pic.twitter.com/U4RnifV6mE

Ladies and gentlemen, this war has just gotten more interesting! We have yet to see what will happen! Will one of them give up? Will the other admit they are not as big of a foodie they thought they were, or will they be able to find a solution to end this digital war?

Stay tuned as we bring you the latest updates!