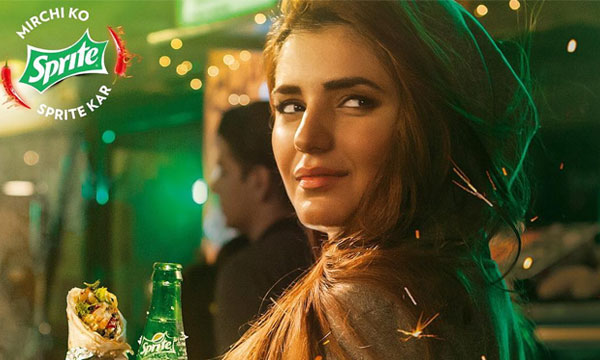 The girl with the nightingale voice, Momina Mustehsan has been named the new brand ambassador for Sprite. She is starring in the latest TVC directed by the uber-talented director Asim Raza.

A teaser for the new advert has just been released and it looks like the young haseena is seeking an adventure, playing an avatar that she’s never been seen in before.

Earlier, Momma sent out teasers to her fans on Instagram!

Keep a lookout! What could it be? Teaser out tomorrow at 6 pm PST 😏🎥 @AsimRazaTVF #BreakTheInternet

What is more,  she shared some sneak peeks of herself indulging in desi food that totally matches Sprite’s #MirchikoSpriteKar brand campaign! Tantalizing her taste buds, the singing sensation can be seen satisfying those food desires in her latest Instagram posts.

The stunning singing diva was last spotted in New York after her great Coke Studio run in Pakistan. Seems like Pakistan had stolen her heart and she just couldn’t wait to come back!

Momina will be seen she enjoying some ‘Masala daar’ Dhaba Food in latest Sprite TVC!

Watch her devouring on some scrumptious Handi!

We love her as the new Sprite girl!

Here are some of the pictures of Momina where she can be seen craving some delicious Pakistani food:

Grimald's pizza in Brooklyn is awesome. BUT – I miss my spicy desi khana 😢#MissingPakistan

#BringMominaHome had also started to trend on twitter some time ago and fans were crazy to get her back to Pakistan.

#BringMominaHome so that she can have ghar ka khana too. I feel ya, sista! pic.twitter.com/gac0i7CqfU

When you had to be at home by 8 o'clock but now it's 8:01 and you still haven't reached so ami calls the whole family:#BringMominaHome

Momina tweeted herself about flying back to Pakistan

Lol how did #BringMominaHome start trending?!I guess I'll have to fly to pakistan now. Help me find a flight! @EtihadAirways is all sold out

Momina Mustehsan Is Supporting Islamabad United & So is All of Pakistan!