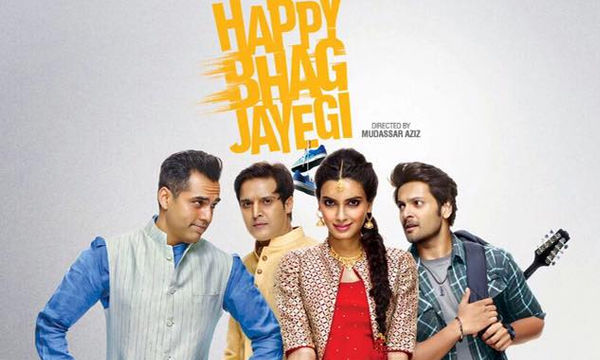 While it is Sheikh’s big Bollywood debut, we hope this rom-com turns out to be a big hit at the box-office. Check out our Pakistani starlet, looking gorgeous for the movie’s promotion in The Kapil Sharma Show

#MomalSheikh with the cast of her debut movie #HappyBhaagJaegi on the sets of #TheKapilSharmaShow. We wish her all the best. @momal15

See some more of her dazzling looks and BTS Shots from the movie:

Soon after the successful and exciting Bollywood ventures of Pakistani actresses such as Mawra Hocane in Sanam Teri Kasam and Sajjal Aly all set to appear with Sridevi in the film Mom, another Pakistani actress Moomal Sheikh is ready to make her Bollywood debut ‘Happy Bhaag Jayegi’.

The first poster and some behind the movie shots recently revealed that August 19th will be the release date of the movie. Have a look at the first poster of the film here:

@Regrann from @hipinpk – Presenting to you the first look of #MomalSheikh's Bollywood debut, #HappyBhaagJayegi! #Regrann The film’s shooting was wrapped up last week and currently the stars are celebrating the HBJ Film’s wrap up party. Have a look at some images below:

Not only the poster but some behind the scene shots of the movie were also shared by Diana Penty on her Instagram account. Have a look at them here:

Who run the world?! 👯🙅💃🏻#BehindTheScenes with #HappyBhaagJaayegi's all girls team #InternationalWomensDay

HAPPY be back! #BehindTheScenes #HappyBhaagJaayegi

Tapal vs. ESPRESSO: Who Cares About Coffee or Chai When There Is Fawad Khan