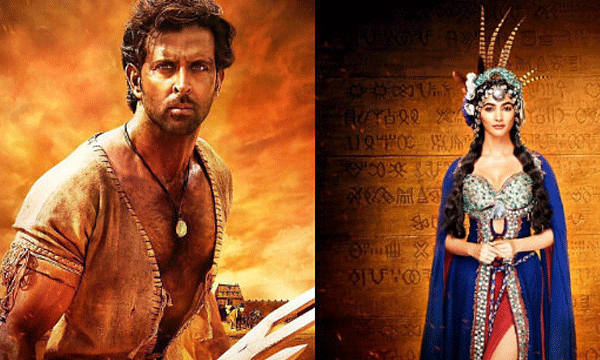 The highly anticipated Bollywood flick of Hrithik Roshan, ‘Mohenjo Daro’ is all set to mark history on August 12th, 2016. Hrithik Roshan has come a long way from portraying a chocolate hero,- making his debut with Kaho Naa Pyaar Hai in 2000, to playing a superhero for Dhoom 2, Krrish and Zindagi Na Milegi Dobara. Roshan is all set to make a comeback in Ashutosh Gowariker’s, Mohenjo Daro.

Watch the Mohenjodaro trailer below:

After the super rustice poster of Hrithik Roshan in Mohenjo Daro was revealed, the regal first look of Pooja Hegde, the female lead in the movie has also been revealed. He believes this movie is the best film he has done so far! The movie is set in the ancient city of Mohenjo Daro –now falling in Pakistan’s Sindh, depicting the ancient civilization 2600 BC.

Finally the wait is over. View the first look of the movie Mohenjodaro below: Earlier, the team also released the motion picture of the movie, giving us a peek into the world of Mohenjo Daro! Mohenjo Daro, besides Hrithik Roshan, also stars Pooja Hedge, a newcomer and the veteran actor Kabir Bedi. The movie is an epic adventure with a touch of romance, where the protagonist falls in love with his enemy’s daughter.

The release date of the movie was announced by the actor Hrithik himself along with his picture via his Twitter and Instagram Page.

The picture shows Hrithik with a clapperboard revealing the release date, along with the Lagaan filmmaker, Ashutosh Gowarikar in the background. The actor also posted a walkie talkie from the sets of Moenjo Daro that noted ‘4 months to go’ for the release of the film.

Journeys that test strength of character are ones you should be most PROUD OF! Its a WRAP! Making bright and beautiful friends along the way I have gratitude for. Thank u Pooja Hegde for all the laughs and madness amidst sheer hard work. And the man himself with the halo around his aura. This is going to be your best yet! Ashutosh! “Ocaptain my captain, respect!!” MOHENJO DARO! See you all on 12th AUGUST. Get ready to be transported into a world that time forgot… Love you all. #AugustRelease #MohenjoDaro #ComingSoon #Historyinthemaking

Have a look at some posters of Moenjo Daro below:

Directed under the banner of Ashutosh Gowariker, the movie also stars Kabir Bedi and Pooja Hedge in the lead roles. The story of the film revolves around an epic love story on an adventure set during the Indus Valley Civilization that dates back to 2600 CE. Have a look at the teaser trailer of the film Mohenjo Daro here:

Hrithik and Gowariker have previously worked together on a legendary historical movie Jodha Akbar, that was a huge success back in the year 2008.

The details revealed that AR Rehman is working on the soundtracks for the movie Mohenjo Daro, whereas Javed Akhtar is writing the lyrics.

Moreover, Karen Goulekas, who won two BAFTA Awards for Best Visual Effects of ‘The Fifth Element’ and ‘The Day After Tomorrow’ has worked on the VFX of the film.

Have a look at some set construction shots of the film here:

The film is all set to release on August 12th, 2016, and there is much more to be revealed about the movie.