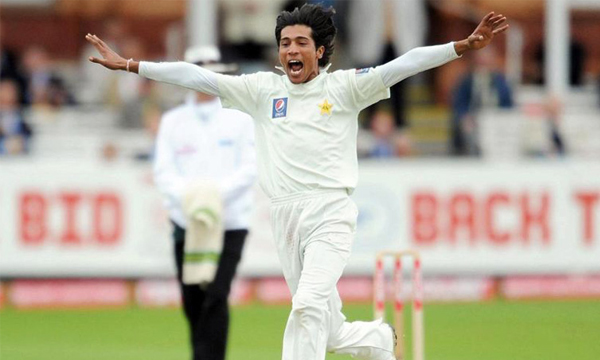 Mohammad Amir can still become the best bowler in the world despite serving a five-year ban for spot-fixing, Pakistan captain Misbah-ul-Haq said Monday.

Left-arm fast bowler Amir, 24, is expected to make his return to Test cricket next month against England at Lord’s, where his exciting career came to a shuddering halt in 2010.

During that year’s Test against England at Lord’s, Amir and Pakistan new-ball partner Mohammad Asif bowled no-balls to order on the instructions of their captain Salman Butt as part of a sting operation carried out by a tabloid newspaper. All three received five-year bans from cricket and, together with sports agent Mazhar Majeed, jail terms.

Amir, who served three months in an English young offenders institute, has only played limited overs internationals for Pakistan, but his career could come full circle when the first of a four-Test series against England starts at Lord’s, ‘the home of cricket‘, on July 14.

Misbah believes Amir, who was one of the hottest properties in world cricket at the time of his ban, has lost none of his skill.

“If you look at his bowling speed, swing and control –- it’s there,” said Misbah at Hampshire’s Rose Bowl ground near Southampton, where Pakistan were training Monday.

“He can still be the best bowler in the world,” he added ahead of Pakistan’s opening three-day tour match against Somerset at Taunton starting Sunday.

“Whatever form of the game he has played since his comeback, he has done well,” said key batsman Misbah of Amir, who in his 14 Tests before his ban took 51 wickets at an average of under 30 apiece.

“He knows he is under pressure but he is handling it well,” the Pakistan captain insisted.

“This is a good chance for him to come here, the place where he had those problems, and show the world he is there to perform and deliver for the team.

“It is a chance to win back all his fans. It’s a great opportunity and he’s working hard.”

As for Amir receiving a potentially hostile reception from English spectators, Misbah said: “It might happen –- you can always hear voices.

“The best way is to concentrate on your skills and your duties and Amir has to focus on his game and what he has to do. He is doing well.”

Pakistan coach Mickey Arthur said he had been impressed by Amir’s attitude since taking charge of the side just over a month ago.

“His training has been excellent, he’s fitted back into the team exceptionally well,” explained Arthur.

“It’s up to me and the coaching staff to make him the best he can possibly be in these conditions,” said Arthur, who previously coached Australia after making his name internationally when in charge of his native South Africa.

“We all understand he’s going to be under the microscope and he realises that too.”

“The way he’s trying to handle that is to let his performances do the talking.”

This is Pakistan’ first full of tour of England since their infamous 2010 visit.

Pakistan, however, have won their last two Test series against England, in 2012 and 2015, both of which took place in the United Arab Emirates.

England defeated Sri Lanka 2-0 in a three-Test series that concluded with a rain-marred draw at Lord’s earlier this month.

But Arthur said he took heart from the vulnerability of England’s top order.

“I do (see weak links) in the top order. Alastair Cook and Joe Root play such a vital role in that set-up.

“I know Jonny Bairstow has played exceptionally well against Sri Lanka but we don’t know who will replace Nick Compton and James Vince is still trying to find his way.

“If we can put their top-order batting under real pressure, we also have a world-class leg-spinner in Yasir Shah.

“So whenever we bowl, there will be no easy period for batsmen.”