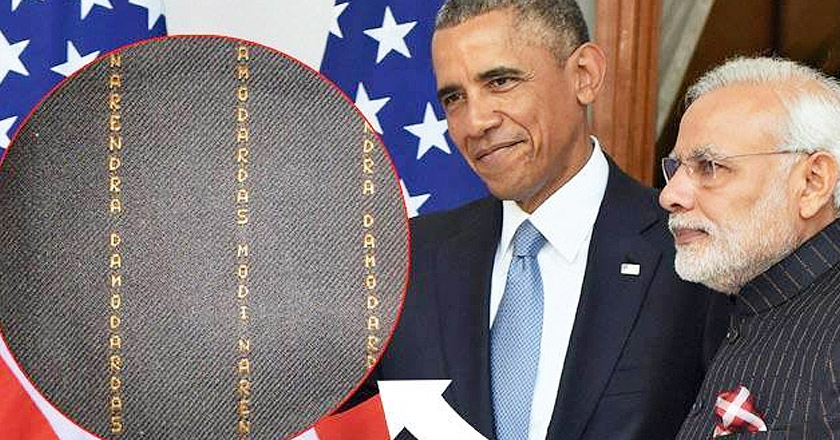 Turns out Sonam Kapoor is not the only fashionista India can boast about.

In a joint appearance with President Barack Obama, India’s Prime Minister Narendra Modi, was sporting a close-necked, pin-striped suit which features his own name “Narendra Darmodas Modi” printed into the fabric in gold letters.

International Media is abuzz with excitement and furor, referring to it either as a style statement or as a subtle display of narcissism.

The suit was worn at Hyderabad House on Sunday Evening when Modi stepped out with President Obama for a press conference. The fashion community is quite impressed with the style statement.

Reportedly, the name has been imprinted on the fabric with great subtlety and finesse, the fabric is hand-woven too. Former Egyptian Leader, Hosni Mubarak has also worn a similiar suit, back in 2011

The man behind Modi’s customized kurta is designer Raakesh Agarvwal.

According to Raakesh, the cost is somewhere between Rupees 80,000 and Rupees 5 lakh, depending on the fabric.

“This personalized textile is the in-thing … Burberry to Hermes, all are doing it,” he stated.

Modi is fast becoming iconic for his apparel choices, be it his customized and well-tailored close-necked suits, his half-sleeved kurta or his choice of orange shawl.

The Indian citizens however, are not quite impressed by their leader’s activities. Take a look at how the people have expressed their annoyance and poked fun at him for this bold move:

It’s not what you wear, fool. It’s how you wear it. #ModiSuit https://t.co/ZyaKsDvRqU

To hv your own name printed on the cloth u wear is a bit too childish. A PM of the nation does not need such kind of branding. #ModiSuit

“Sir, aapka visiting card?” *Takes off the suit and gives it* #ModiSuit

Who needs to lose money to corruption when we can spend it on clothes? Clothes clothes clothes. I’m sure Sonam Kapoor would agree. #NaMo

Move aside Keanu Reeves from The Matrix, #NaMo is The One not Neo!! The Matrix code is now deciphered and printed on the #ModiSuit !!

Indians trusted an Italian for 10 yrs and got nothing at least we can give a chance to an Indian in fancy suit. #ModiSuit #NarendraModi

Wearing a suit with your name weaved into it is not entirely unlike tweeting your own selfie and favoriting it. #ModiSuit #narcissism