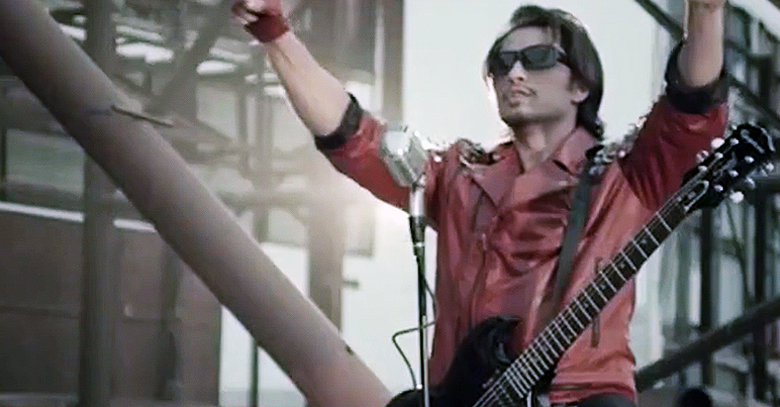 It seems Mobilink is fated to come up with mediocre campaigns, regardless of how catchy, flashy or artsy they wish to become they always end up becoming just about ordinary.

As the countdown is reduced to just three short days before the country’s biggest musical reality show, ‘Pakistan Idol’, officially debuts – Mobilink, one of the prime sponsors of the reality show, has come up with the ‘Pakistan idol Anthem’ by Ali Zafar.

The very expensive looking anthem, has some outstanding camera work with an exceptional screenplay and direction – unfortunately that’s all it had.

The below-average lyrics, clichéd guitar-riffs, unoriginal concept and the bold display of shallow wardrobe add to the imperfect synchronization with the half-tired Bollywood inspired vocals of now-very-commercial Ali Zafar.

With Lyrics that say, “Apni Awaz se Choo Lo”, Mobilink is again being gunned down over their needless investments that have caused the company to not only drop in performance in the last few years but also in market share.

However, through a broader speculation – let’s critically analyze the ‘Pakistan Idol Anthem’ launched today by Mobilink.

On another day, over any other advertisement bad lyrics or voice would work with good visuals but as the starter for a “singing” competition, let alone – it being Pakistan idol the biggest platform that wishes to showcase some of the better singers of the country – it is a forthright “out of the question” notion.

Mobilink seems to disagree though. They believe in asserting their brand ambassador’s face in every commercial since he did belong to the music industry once.

2. The exhibition of IPhone

Wasn’t the show ‘in promotion’ called, ‘Pakistan Idol’? It seems the promotional song is only focused to the upper economic portion of the society, it’s either that or Apple sponsored the entire video, otherwise such dense product placement with a futile shot of two truck drivers playing cricket would not cater to the lower part of society which is most enriched with talents like singing.

3. Resemblance with the movie “Rockstar”

Ali Zafar’s attire and the concept of the video seem a bit too familiar. One could just call it clichéd and move on, since anything Ali Zafar does these days give out a Bollywood feeling, but Ali Zafar’s facial hair which seems something confused between a ‘Goatee’ and ‘Fu Manchu’ – reminds of Ranbeer Kapoor and his attire in the movie Rockstar.

Mobilink tried to do something notable however they ended up selling the ‘Red’ stuff that doesn’t work in a new wrapping. On their official social media page, people have drowned the post of ‘Pakistan Idol Anthem’ in all sort of suggestions for the brand that range from their poor service, suggesting the investment to be redirected onto launching 3G Network, pacing up the Internet service while some women blatantly declared their love for Ali Zafar others remarked upon the Anthem calling it mediocre.

Thus the Anthem can be deemed a puny effort of standing out that has emerged as just another middling advertise from the ‘once mobile phone giant’.