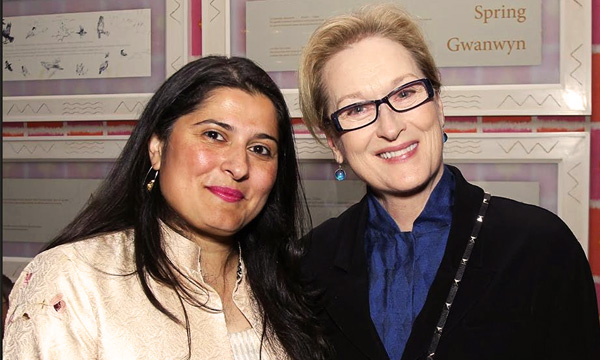 The iconic Hollywood Actress Meryl Streep hosted the SOC Films premiere of “Song of Lahore” in the (NYC) US and certainly enjoyed the band’s performance. Academy and Emmy Award winning filmmaker Sharmeen Obaid-Chinoy and Andy Schocken’s documentary “Song of Lahore” premiered in New York City [NYC] on the 3rd of November 2015. The premiere was hosted by legendary Academy Award winning Actress Meryl Streep at the Crosby Street Hotel in New York where a special performance by The Sachal Jazz Ensemble took place after the screening.

Music has no language the crowd tonight walked away after watching @SongOfLahore with a diff view of our culture pic.twitter.com/CpjDWs91Yy

Sharmeen Obaid Chinoy, the director of ‘Song of Lahore’, has shared pictures of Meryl Streep swaying and enjoying the performance of Sachal group on Twitter.

Meryl Streep enjoying the performance put up by @SachalMusic after @SongOfLahore screening in #newyork #pakistan pic.twitter.com/CIqhoIsVoQ

‘Song of Lahore’ is a documentary which focuses on the music community of Lahore, which until the late 1970s, was world-renowned for its music and talent. In 2004, Izzat Majeed founded Sachal Studios to create a space for traditional music in a nation that had rejected its musical roots.

After convincing a number of master musicians to pick up their instruments again, they quietly released some classical and folk albums, but an experimental album fusing jazz and South Asian instruments brought Sachal Studios worldwide acclaim.

Let’s have a look at some of the event images below;

‘Song of Lahore’ turns the spotlight on Sachal Studios and charters the ensemble’s journey to reclaim and reinvigorate an art that has lost its space in Pakistan’s narrowing cultural sphere.

Sharmeen Obaid-Chinoy has made over a dozen multi-award winning films in over 10 countries around the world. Her films include Saving Face, Transgenders: Pakistan’s Open Secret and Pakistan’s Taliban Generation.

Tonight was a great night 4 #pakistan in #NYC! We put our best foot forward- Proud of @SachalMusic & @SongOfLahore pic.twitter.com/SV7lGSV7E0

Have a look at the official trailer of ‘Song of Lahore’ below;