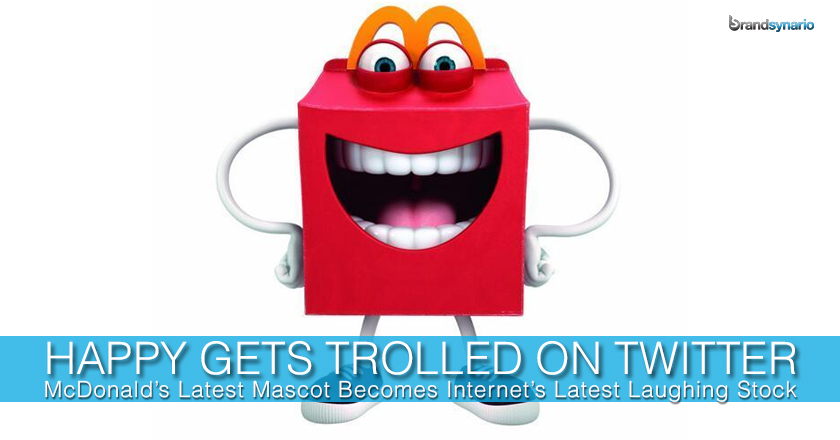 The newly introduced mascot is a human-like cartoon character shaped like a box with a huge set of white teeth. According to Mc Donald’s, Happy was originally introduced in France in 2009.

The fast food giant expects Happy to bring fun and excitement to kids’ meals and be an ambassador for balanced and wholesome eating which will automatically curb down obesity issues among children.

Sadly, so far all Happy has achieved are trolls and sarcasm from Twitter and Photoshop wizards on the internet. It seems his impeccably large mouth; gleaming white teeth and a tad bit creepy look with golden arches on top have made him a perfect target for Twitter’s leg pulling.

The company promised: “We guarantee you’ll be smiling in 3, 2, 1 …” but fans have named him “Nightmare food” and “Creepy.”

Here are some of the sad but hilarious reactions Happy has received so far,

Introducing the new McDonald’s mascot, “Happy” I badly wanted to believe this was a hoax. pic.twitter.com/YNZdx4n9FW

Introducing the new McDonald’s mascot, “Happy” I badly wanted to believe this was a hoax. pic.twitter.com/YNZdx4n9FW

Do you eat it? Or does it eat you? RT @MarketWatch: McDonald’s ‘terrifying’ new Happy Meal mascot goes viral http://t.co/UL2iMMVEes

Jesus christ I’m going to have nightmares about the new McDonald’s mascot. http://t.co/aF223xkZ4C

We aren’t sure whether Happy will be able to create the same brand identity as Ronald McDonald’s or will continue to get trolled. But hey there Happy! Don’t be sad; you definitely have our best wishes with you.