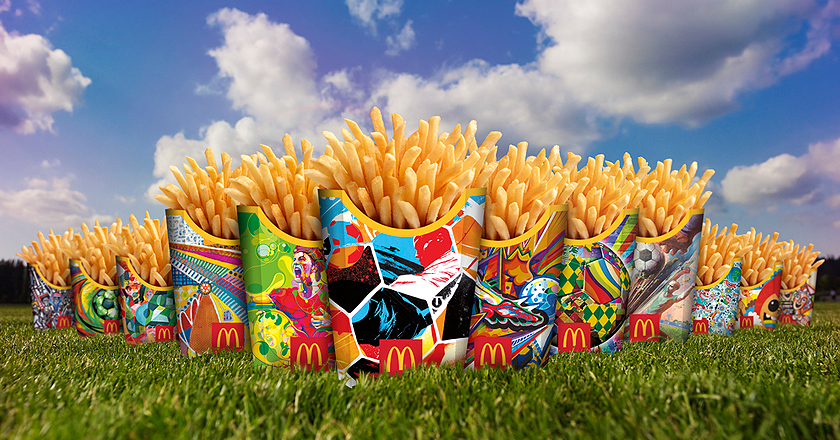 With FIFA World Cup 2014 right at our footsteps, companies are going wild with ideas about marketing activities. McDonalds however has carefully and intelligently placed its brand for this year’s FIFA World Cup.

The fast food giant who has officially represented World Cup for 20 years, has changed the color of its flagship French fries packaging, from red to multicolor art pieces, have a look:

You must be wondering that what is so creative about this packaging change; well the creative part starts here; it’s not just a packet carrying your favorite Mc Fries anymore. Mc Fries packages now hold themes of street art adopted from various renowned artists from around the world including,

Behind this brilliant art work on each and every package is a hidden bar code to enter McDonalds FIFA World Cup 2014 app “Gol”.

The app entitled “McDonald’s GOL!” is available for downloading on Apple’s App store and also on Google’s Play Store, while it can also be downloaded at GOL.McD.com.

Not only this but McDonald’s all 800 outlets throughout Brazil are now offering a whole new menu of soccer inspired sandwiches in honor of the teams of Argentina, Brazil, France, Germany, Italy, Spain and USA.

In the words of McDonald’s CEO Woods Staton,

“McDonald’s wanted to bring the international flavor of the FIFA World Cup tournament to [its] loyal and soccer-loving customers in Brazil,”

Each of the sandwiches will continuously be offered each day of the week until at least 25th June 2014.