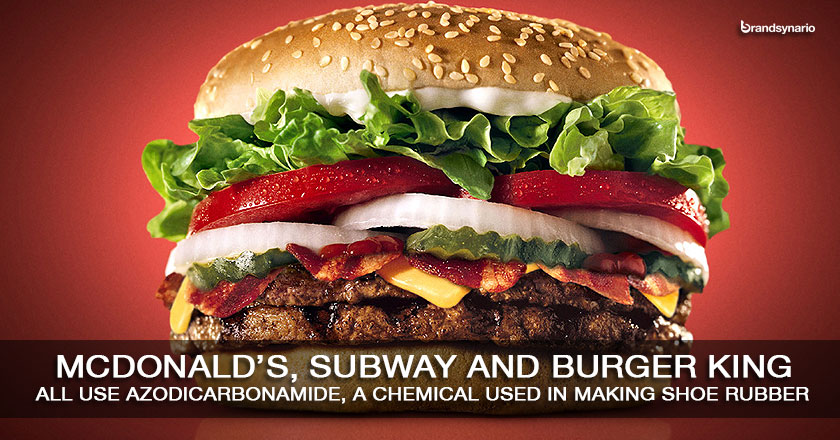 Yes, after Subway and Burger King, McDonalds is being accused of using ‘Azodicarbonamide’ in its burgers and sandwiches. Previously, Subway was also alleged with using the same hazardous chemical followed by another big name ‘Burger King’.

Azodicarbonamide is a chemical compound that is used in making shoes, yoga mats and synthetic leather. For our ease of understanding, let’s call Azodicarbonamide the ‘Rubber making chemical’.

It has also been exposed recently that Chik-fil-A, Dunkin’Dounts and KFC, amongst many others also use Rubber making chemical in their rolls and baked food items – Subway is the first one to announce this week that it will drop the notorious ingredient from its bread.

This shockingly widespread use of these chemical compounds and flour bleaching chemicals has grown exponentially in the last few months. Vani Hari is one of the first ones to initiate a structured strive to stop these International chains in using these hazardous chemicals in their food, especially when their daily attendance touch millions.

Vani Hari is a famous Food blogger, from FoodBabe. She initiated a full-fledged petition that virtually forced Subway to stop using the ingredient.

Both Burger and McDonalds use Rubber making chemical in the production of their buns. While Burger King also uses the chemical in its French toast sticks, McDonald’s virtually use it in all of its bread-based items from regular and Big Mac buns, to bagels, English muffins and sesame seed buns.

Food inspectors often quote the American code of conduct’s permission to use the chemical in food industry under the heading that permits the chemical to be used “at levels up to 45 ppm”. Seldom to they know that the ‘Rubber making chemical’ was banned for use in food in Europe and elsewhere after a 1999 World Health Organization study found that it could induce asthma and other respiratory issues, as well as skin conditions.

However, American food industry has remained plague-ridden with the Rubber making chemical for God knows how long.

Even the loyal Dunkin Donuts patrons can find the Rubber making chemical in croissants, Danishes and the toast used in the Big and Toasty and grilled cheese sandwiches.

‘We are evaluating the use of the ingredient as a dough conditioner in our products and currently discussing the matter with our suppliers,’ a Dunkin Donuts spokesperson commented on the matter.