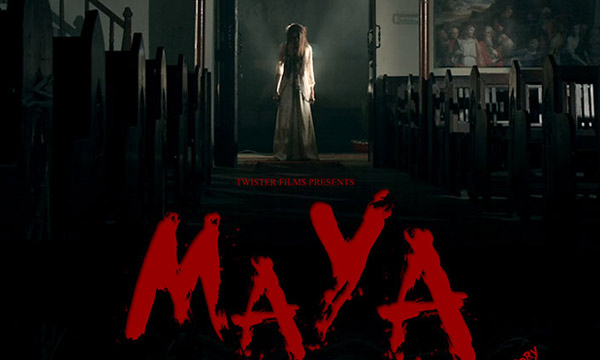 Although the multi-talented Teen Bata Teen actor and Dr. aur Billa singer is to be appreciated for his daring foray into the genre of horror, Jawad Bashir’s directorial debut with Maya did not go down well with the audience.

Perhaps it is because the major characters Waqas (Ahmed Abdul Rehman), Sam (Zain Afzal), Rida (Anum Malik) and Amir (Sheikh Mohammad Ahmed), were all debutantes and horror is certainly not child’s play (no pun intended). Hina Jawad’s performance as Maya was definitely the best of the lot but that does not mean she was really convincing nor was her makeup.

She had the complete look of your typical evil female entity: disheveled hair, blackened eyes, red smeared lipstick, etc. She had a raspy and hoarse voice to boot. The poor visual effects did not help in creating the illusion of evil.

As with all horror movies, there had to be a bunch of young adults going on vacation to live in an abandoned building. The building ofcourse, happens to be near a graveyard. And the young adults naturally engage in some grave-violating frolic and fun and accidentally release an evil spirit Maya, who attempts to kill them off one by one. Nothing new here.

What’s new is the un-Pakistaniness of the movie, as promised by the director. I mean, do Pakistani mixed-gender friends even go on vacation together like this? And then there’s the priest (Rasheed Ali) instead of your regular mullah.

Maya starts rather slow, with the first 30 minutes being rather dull. However; what’s great is that it does not run on. In the remaining 52 minutes of run time there are at least two gory horror scenes, which make it inappropriate for viewers under 13.

The movie also has its share of thrills and chills, especially when it reaches its climax, and the background score (which is not unpleasant overall) is at a matching crescendo. Plus the director is definitely to be appreciated for directing the first full-length Pakistani horror film to hit the big screen in eons. But one can do that only if one can look past the hackneyed plot and the mediocre cinematography.

Overall, a rating of 6 out of 10 would suffice as horror aficionados might actually enjoy the experience, even if that’s not what they wanted from a horror flick.