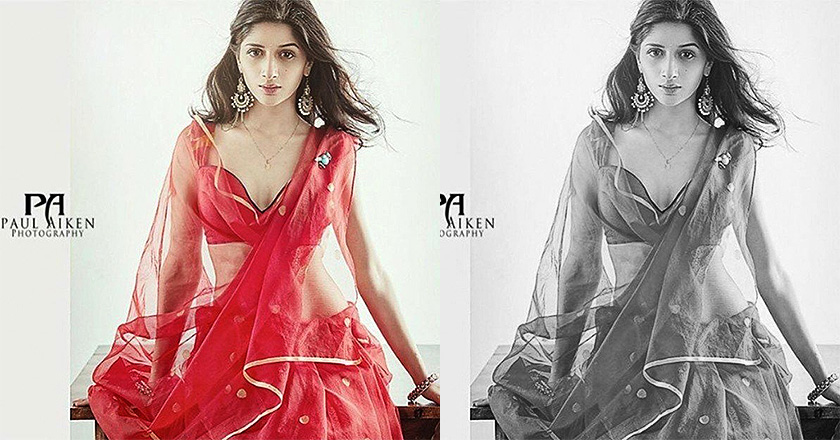 UPDATE: Mawra Hocane is all set to star in upcoming Indian movie ‘Sanam Teri Kasam’ and a new image has now been revealed! The picture shows Mawra in a teddy bear costume and a tattooed Harshvardhan Rane by her side. Mawra looks quite different from her earlier steamy shot in the bathtub.

“They say its my home turf;)” your REPLY MAWI 😍😍😛😜 looking goergeous in sarii and your crying ❤❤ expressions 😍😍😘 #mawrahocane #mawra @mawrellous 😍😍 THEE WAYY HE IS LOOKING AT MAWRIII 😍😍 harshiii bahiii looking soo innocent..😍😘 #harshvardhan @harshvardhanrane.. #onset #sanamterikasam 🎬😘😘😘 A photo posted by SANAM TERI KASAM (@sanam.teri.kasam) on Dec 4, 2015 at 8:22am PST

Featuring Mawra in the red ghaghra ensemble, as shown in the Paul Aiken picture, she is lying in a tub filled with roses and water, while Harshvardhan Rane cradles her face. View the poster below: While it is not quite clear whether ‘Sanam Teri Kasam’ is a remake of the 1982 hit starring Kamal Haasan and Reena Roy, Mawra in her limited media interactions has termed her debut movie as ‘a beautiful love story comparing it with Aashiqui 2.’ The tagline is as ‘A Love Story Sealed With A Curse’.