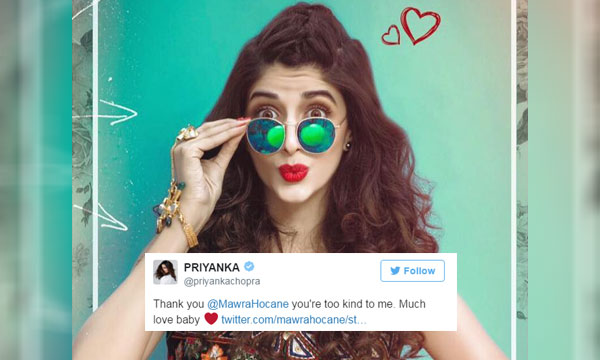 Ever since Mawra Hocane made her dream debut in India, she makes sure she maintains her connection with the bigwigs of Bollywood. Just recently, she received love and heartfelt wishes from the Quantico starlet, Priyanka Chopra and the fashionista, Sonam Kapoor.

For those who don’t know, Peecee’s debut home production, Marathi movie ‘Ventilator’ bagged 3 accolades at India’s 64th National Film awards while Kapoor got a special mention for her leading role in “Neerja”.

Our Hocane hottie did not shy away from congratulating both the B-town babes on twitter!

Thank you @MawraHocane you’re too kind to me. Much love baby ❤️ https://t.co/QKawz6f4QG

So so sweet mawra!! Lots of love and gratitude! https://t.co/W7379hQgnK

We must admit it was pretty sweet of Mawra. Many might not be aware but she has interacted before too with Piggy Chops when Sanam Teri Kasam was being released across the border! But this really made us all go aww!

Good to see that despite the ban of Pakistani celebrities in India, stars of both the lands do not hesitate to share words of goodness! Truly, love trumps hate!

What is Mawra Hocane’s Mystery Project About?