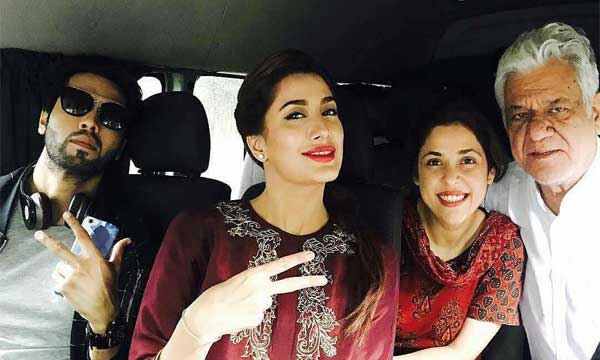 Om Puri’s sudden death has certainly shattered the whole of entertainment fraternity in India. The actor’s friends from B-town have expressed sorrow and are mourning his sudden demise. Even celebrities in Pakistan who knew the star and loved his work are paying tribute to the legendary star.

Puri has acted not only in Hollywood and Bollywood movies but also in Pakistani film “Actor In Law”, that starred Mehwish Hayat & Fahad Mustafa. Celebrated by many, there was deep love for Pakistan in Puri’s heart and he had quite a fan following in the country. He received a warm welcome in Pakistan when he arrived in the nation for Actor in Law Promotions.

For his devotees in Pakistan, he will always be remembered as a promoter of peace and harmony between both the nations!

Pakistani celebrities took to social media to express their condolences!

#OmPuri a legend to work with & a man with his humble & loving nature won the hearts of people across the border. May his soul RIP

A fine actor & a courageous human being; Om Puri stood his ground and relentlessly worked for peace & harmony in toughest times #RIPOmPuri

The world loses a great artist, truly one of Indian cinema's https://t.co/JKRfpmzp5U In Peace #OmPuri

RIP #OmPuri sir! You will always be remembered as the promoter of peace and Love between the two countries & for so much more…

@fahadmustafa26 @nabeelqureshi So sorry to hear of #OmPuri. Pls accept my condolences on the passing of a great actor. #Pakistan mourns him pic.twitter.com/bUWUXLCZdh

You were a bollywood icon that represented us in the East and in the West. Thank you sir. RIP Sir Om Puri. #EastIsEast pic.twitter.com/xIiM9zerhs

Om Puri’s 7 Epic Quotes That Will Inspire You!