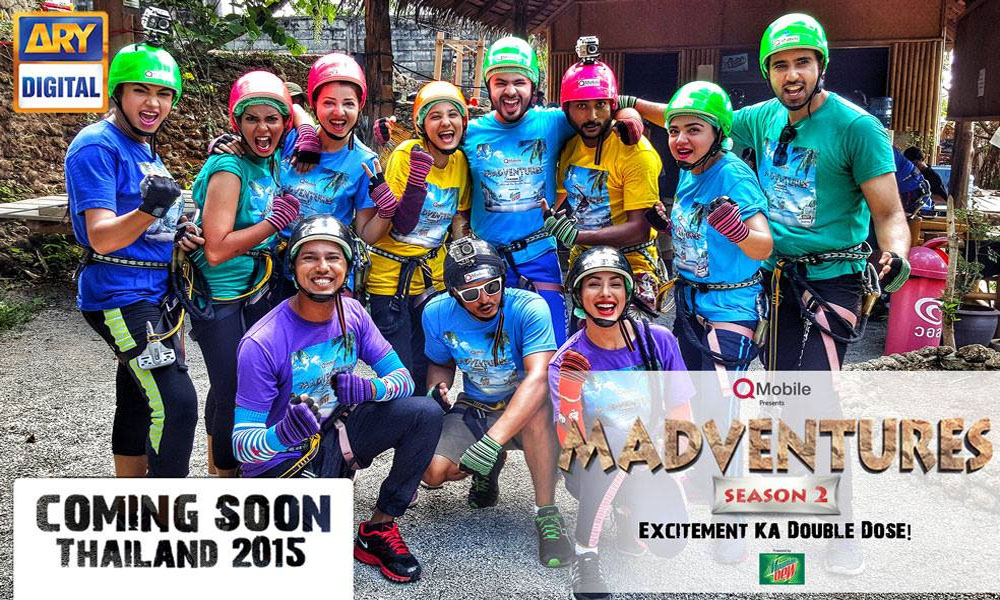 ARY’s cutting edge and action- packed reality ride of adrenaline- fuelled, blood pumping experiences, Madventures has rolled out the teaser of its much awaited Season 2 and this time it will be taking its celebrity backpackers on a tantalizing trip to Thailand!

With a two-year long break, the desi adoption of Fear Factor returns on television promising “Excitement ka Double Doze” with its new band of Mad-superstars.

The crazy but witty Ahmed Ali Butt will take over Ahsan Khan as the host of the show in the second edition of series while Mehwish Ayat, Natasha Ali and Danish Hayat will be among the twelve rough and tough contestants to be rivaling against each other.

While Hayat too starred in 2013 Madventures and came out as winners of the series, her glimpse in the season 2 posters confirms that they will be returning to the show again this season.

As per the sneak peak of exquisite sceneries from the forests and beaches of Phuket, Thailand, the boys will be teaming up with the ladies this time around to combat the daring challenges and risky expeditions.

Take a look at the teaser videos below.

Check out the intense- rugged look of the participating celebs in these teaser posters of Madventures 2015. The previous season featured celebrities from both India and Pakistan, ganged up against each other for mind-boggling stunts and tenacious outdoor dares.

Seemingly, no Indian stars have been hinted or spotted in the mini glimpses of the new season.

Ought to more rocking and bizarre than its old edition, let’s see if Madventures manages to keep the audience hooked to all the madness this time around.