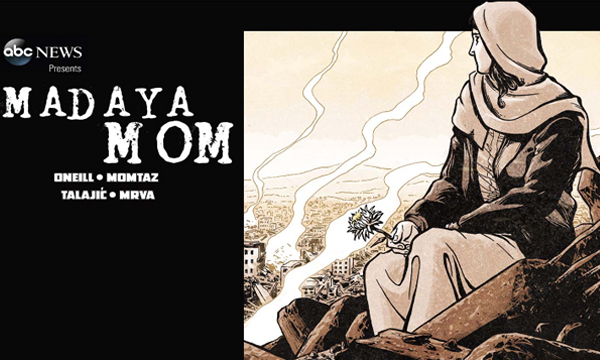 Marvel is known for incorporating world events in their comics, combining reality with fantasy. Collaborating with ABC, they released a comic featuring the life of a Syrian woman- Madya Mom. The superhero is the mother of five, surviving in the war-torn Syrian town of Madaya.

This comic is based on the true story of an anonymous resident of Madaya who managed to contact ABC and bring her story to light through journalists who published several anonymous blog posts in her honor. She speaks of her battle in trying to keep her children from starvation and surviving all the bloodshed that is occurring all around her. Madya Mom is displayed in the comic as showing extraordinary strength during this crisis that she is going through with her family, having been trapped in their town for over a year. The illustrator of the comic, Dalibor Talajic, refused to do a war comic, not wanting to focus on the destruction and gore, but about a civilian going through a devastating crisis.

He stresses on the variations between the traditional superheroes and this super-mom by stating that, “Superheroes are not defined by their powers or their physique. Superhero is in the heart. Madaya Mom fits within this category because she finds strength to be human and unhardened.”

With the help of a @Marvel​ illustrator, we tell the story of a mother trapped in Madaya, Syria, in a digital comic. https://t.co/CTZTbiPk1k pic.twitter.com/lyQ5uE6yPY

The opening page of the comic features a movie line, bound to give you goosebumps:

This comic, that can be read here, guides to provide many an insight into what is happening in the world around us, through the perspective of a real person.