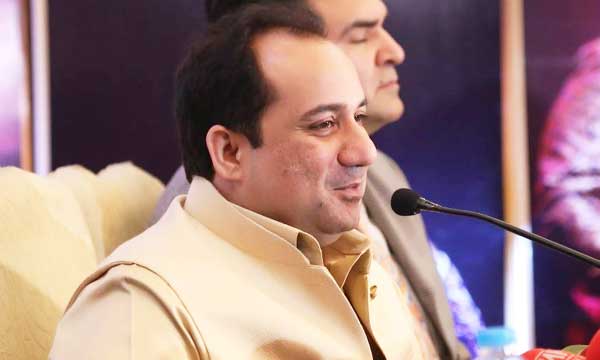 With all Pakistani artists being barred from working in India, seems like the music companies across the border are not paying heed to this ban. Just last week, Rahat Fateh Ali Khan’s latest single with acclaimed Bollywood singer, Anupama Raag “Saware”,- in collaboration with  Zee Music- was released and was loved in both the nations

In an interview with Times of India, Rahat Fateh Ali Khan broke silence on the on-going controversy between entertainment industries of India and Pakistan!
The Sufi maestro divulged that every artist should raise voice against terrorism be it anywhere in the world.

We should respect the country we represent. When it’s about the country, we (artistes) are nothing; we are not above the country. We should condemn terrorism no matter where it takes place.

We love India and any act of terrorism or dehshatgardi should be condemned. I have done that myself.

Rahat was of the opinion that nothing can separate India and Pakistan as they are emotionally tied together!

It’s not possible to separate the two countries suddenly. We are connected by emotions. There should be peace and dialogue between us and we should value and respect each other’s jazbaa.

However, he expressed his inclination to visit India again as soon as the ties get better

Inshallah, I will come soon. As soon as the conditions between the two countries improve, I would love to come.

When asked why he is always a part of controversies in India, Khan replied

Well, I have never tried to create any controversy. I am always out of the country whenever there is one.

It is great to see Pakistani vocalists like Atif Aslam and now,  Rahat Fateh Ali Khan appearing in music videos.

The video of his tune has been released and the duet is as soulful and romantic as it can get! The video has popular Indian actor Kunal Khemu and Miss India Grand International 2015, Vartika Singh.