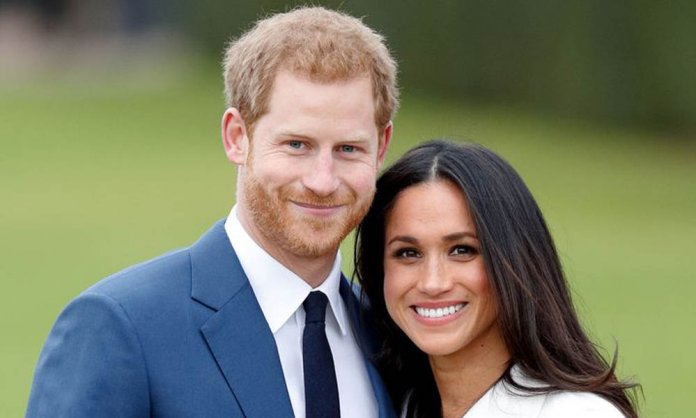 London is gearing up to host the wedding party of the year, with hotels rolling out the red carpet for royal watchers keen to get in on the craze. From a helicopter tour of London, to an excursion to Windsor Castle and a high tea service featuring wedding dress cakes, here’s a look at some of the royal wedding hotel and travel packages fit for a queen.

Hotel Café Royal, London
The wannabe Harrys and Meghans of the world can recreate their own royal nuptials with the Empire Royal Wedding package which includes an overnight stay at the hotel’s largest one-bedroom suite. The sumptuous suite features velvet sofas, leather armchairs, and a marble bathroom. The package also includes a helicopter tour of London and a tour of the official wedding venue Windsor Castle, including the chapel where they are to wed, and state apartments where the royal couple is expected to spend their days throughout the wedding festivities. The hotel will also prepare a gourmet picnic hamper and send you off to visit retailers that carry Royal Warrants — the seal of approval from Buckingham Palace — along with VIP shopping services at luxury retailers like Liberty and Burberry. The Empire Royal Wedding package is available until June 21, 2018 and starts at £6,500 (US $8,805).

Dukes London, London
Called the “Royal Escape,” the itinerary at Dukes hotel is heavy on guided tours and excursions. First, there’s a three-hour guided walking tour of Westminster Abbey, where many a royal wedding has taken place in the past. Then there’s a four-hour excursion to Windsor Castle, the official royal residence in Berkshire. The package also includes afternoon tea in the hotel drawing room and a three-course meal at a London restaurant. The Royal Escape is available to book until June 3. Rates vary.

The Berkeley
Throughout the month of May, The Berkeley’s signature Pret-a-Portea afternoon tea service — popular for its edible recreations of fashion designs from the catwalk — will be inviting guests into the kitchen to help bake their own Royal Wedding collection. Guests will learn how to recreate a wedding dress biscuit in the style of Ralph & Russo, Phillipa Lepley and Suzanne Neville, and stiletto shoe cookies inspired by Manolo Blahnik and Jimmy Choo. Following the masterclass, guests will retire to the Collins Room and sit down to sample some bridal design treats.
£225 per person for the masterclass (US $305).

Cunard – at sea
On May 19, a trio of Britain’s most luxurious ocean liners will not let the historic occasion go unmarked. Celebrations are planned for cruisers aboard the Queen Mary 2, Queen Victoria and Queen Elizabeth, when all three liners will celebrate the royal wedding, separately, but simultaneously. Guests aboard the cruise ships will be able to watch a screening of the royal wedding while sailing the high seas and partake in a special afternoon tea that will feature a Victoria Wedding Cake, Union Jack Butterfly and Chocolate Crown. A commemorative dinner and keepsake menu in the main dining rooms are also planned. Guests will also be able to toast to Prince Harry and Meghan’s health and happy marriage with celebratory cocktails like the Princess Bride and American Beauty.

The royal wedding is May 19.