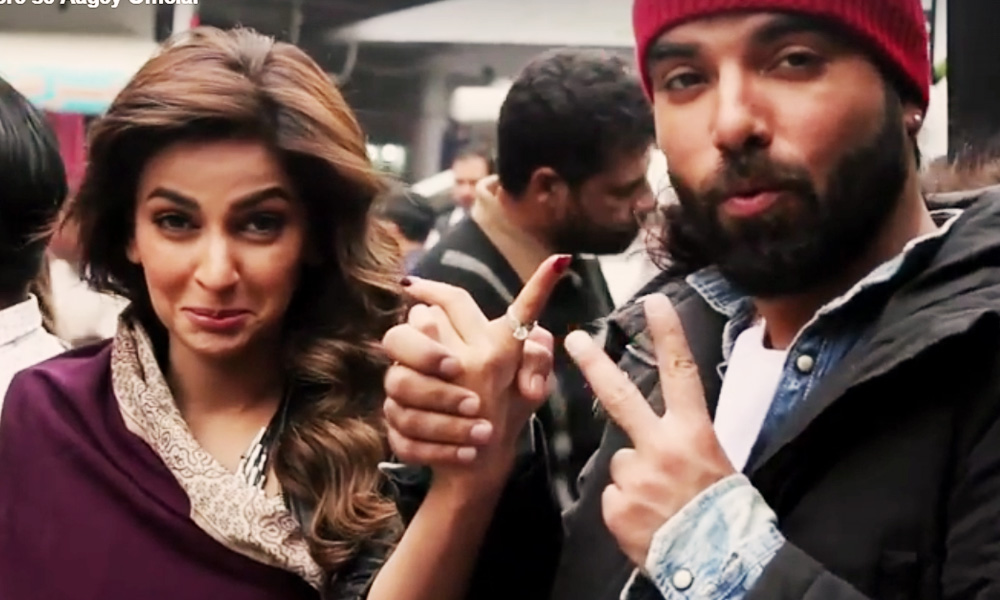 Saba Qamar’s upcoming Pakistani movie Lahore Se Aagey is all set to release on 11th November 2016 and we are more than excited! The main lead of the film, Yasir Hussain is playing the character of Moti. Saba Qamar will be playing the role of a rock star in the movie. The plot of the Lahore Sey Aagey revolves around Yasir Hussain, this time who meets the actress on his way to Northern areas from Lahore. The journey in the movie will display some of the funny and humorous moments, better than its prequel!

Here is a funny Behind the Scene video of Lahore Se Aagay-watch and laugh away!

This time around, ARY Films have teamed up with The Showcase Films for Lahore Se Aagey. The tale is being directed by Wajahat Rauf with Yasir Hussain as the writer.

Lahore Se Aagey New Poster ft. Saba Qamar Has Us All Excited About the Movie!

View some of the BTS shots below:

“Lahore Se Aagey has been one of my greatest experiences so far! I had the opportunity to work with Wajahat (the director) on a couple of projects previously as well, but it is mind-blowing to share the screen with Saba for the first time!” said Yasir Hussain.

“We’ve been shooting the film in Swat for the past two days. I definitely don’t want to blow my own trumpet, but it is being made on a larger than life canvas. And I can honestly say that this is one of the most promising films to come out this year!”

The film revolves around another road-trip, starting from Lahore towards the Northern Areas to meet Behroze Sabzwari, Moti’s uncle.

During the journey, Moti meets Saba Qamar, a singer struggling through her career. Rubina Ahsraf will be seen in a supporting role.

Presently, shooting of the first phase of the movie has begun in Swat while the second phase will be shot in Islamabad next month.

The BTS shots and selfies sure seem like a lot of fun! We wish the team all the best for ‘Lahore Se Aagay’ which sure seems like yet another commercial flick from Wajahat Rauf.

View some fun BTS shots from the sets of Lahore se Aagay below:

With the coolest director !! #lahoreseaagy

The story revolves around Moti and his interaction with a female rock star (Saba Qamar), says Yasir Hussain. This time, Moti travels to the northern areas of Pakistan, hence the name ‘Lahore Se Aagay’.

See the poster below: Apart from Yasir Hussain, the film includes some new actors like Ahmed Ali, Aashir Wajahat, and Mantaha Maqsood. The film will be directed under the banner of Wajahat Rauf and the script itself is written by Yasir Hussain. ARY Films will be producing and distributing this movie.

The music of this film will be directed by singer Shiraz Uppal and Noori’s Ali Hamza and Ali Noor. Wajahat while revealing more buzz about the songs in the movie said that there may be more project-based-songs (item numbers) in the movie this time.

Yasir Hussain further revealed that “The movie does not star Shahzad Sheikh or Ayesha Omar, but Aashir Wajahat and Ahmed Ali might make a guest appearance.”

According to the director of the film Wajahat Rauf, the female lead will be seen evolving as the movie proceeds, just like the original film. The official first look will be out by this weekend.