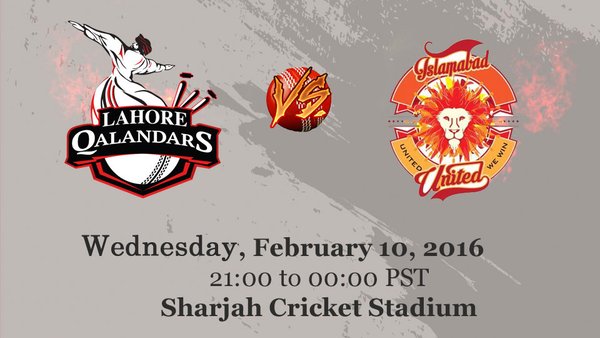 UPDATE: What a magnificent victory Islamabad United named to themselves, defeating Lahore Qalandars by 8 wickets in chase of 167 runs. Shane Watson and Sharjeel Khan put up the highest partnership of this league (153 runs) for any wicket and it was wonderful show of hitting sixes by both batsmen who scored 79 runs and 7 huge sixes each.

Sharjeel Khan remained not out on 79 runs and he was awarded Man of the Match.

The high-spirited Lahore Qalandars are ready to take on cool and calm Islamabad United today in 9th match of PSL T20 2016 at Sharjah Cricket Stadium. The thumping victory of Qalandars against Gladiators has lifted their morale and most importantly, their star batsman Umar Akmal is back in form now that was much needed for the side.

Islamabad United has managed to pull off things in the last match they played against Karachi Kings, so we can expect that it would be a totally different contest between those two teams who are gaining momentum now.

It is not sure that Chris Gayle will play next matches of PSL or not, but all eyes will be on Umar Akmal now, will it be his day or Misbah and company comes to action.

All previous matches of PSL T20 have been played at Dubai International Cricket Stadium, but for the next 9 matches till this Sunday, the event has moved to Sharjah.  It’s a new pitch which will help batsmen to score runs unlike Dubai, where they struggled to put up 150 plus total except last match.

Both Lahore Qalandars and Islamabad United are at bottom in points table with 2, 2 points each.

So who wants to watch the #Rizwan blitzkrieg from the first innings? Magical hits from the @lahoreqalandars keeper! pic.twitter.com/2GxnFtDBC3

.@lahoreqalandars put up 166 courtesy #Rizwan! Will this be enough? Innings summary pic.twitter.com/fAWvPhjYHG

Relaxing with @captainmisbahpk &M Sami before big match @IsbUnited VS @lahoreqalandars .Keep me in your prayers pic.twitter.com/hiJWBCIvFQ