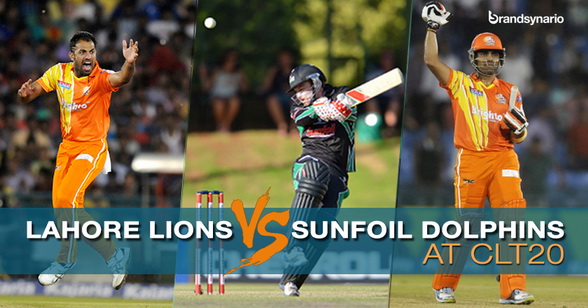 Raging Lions from Pakistan battle it out against the Dolphins from South Africa in a mouth-watering tie at the M. Chinnaswamy Stadium in Bengaluru for Match 14 of CLT20 2014, on Saturday, 27th September at 3pm PST.

Yet to register their first win in the competition, the Dolphins are still reeling from their defeat at the hands of Chennai Super Kings in their last match, which was nothing short of a massacre as CSK posted a record breaking total of 242 in their 20 overs. Dolphins played out an entertaining match against the Perth Scorchers in their first game, where they posted a total of 164 for the Scorchers to chase. In an amazingly sensational contest where the Scorchers required 12 off the last two balls of the match, the Dolphins’ hearts were broken courtesy of two fabulous sixes on the last two balls by batsman Mitchell Marsh.

The Dolphins look set to make things right as they next face the Lahore Lions, who themselves are yet to register a victory in the competition. Having lost their first match against KKR and sharing points with CSK following the abandonment of the match due to heavy showers, the Lions see this match as a must-win encounter.

These teams face off in a potential 8-pointer; both of them would be desperate to register their first wins and hope that a win would trigger a good run of matches for their side. But how would these two seemingly struggling sides fare up against each other? Here’s a low down of what to expect from the game.

The team selections would be based completely on the late-afternoon weather and pitch conditions. But both of the sides are unlikely to name changed line-ups from their previous matches.

The left-handed opener entertained briefly against the opening bowling attack of the Chennai Super Kings, scoring a blistering 34 off 9 deliveries, finding the boundary with four 4s and two 6s. His shot selection and the ease with which he finds gaps between the opposition fielding is something the Lions must keep a watchful eye on.

Perhaps the brightest spot for the Dolphins in the annihilation at the hands of CSK, 23-year old Chetty played out a mature innings of 37 from 28 balls to put wind in the sails of the batting team, albeit for a short while. His maturity and extremely reliable batting could prove to be a stringent test for the Lahore Lions’ bowling attack.

Against the Perth Scorchers, Zondo played out an unbeaten 63 off 44 balls which proved to be the pillar on which the Dolphins posted a challenging total of 164 runs. With his smart thinking, using the full depth of the crease, changing his stance frequently, and making resolute attempts to increase the tempo of the innings, he is a potent weapon that the Dolphins possess.

‘Professor’ Hafeez is undoubtedly one of Lahore Lions biggest assets, with exceptional batting and technically brilliant off-spin bowling, coupled with his tremendous captaincy. His slow-paced bowling to left-handers is a major threat that the Dolphins must look out for.

Perhaps his comparison with India’s Virat Kohli is uncalled for, there is no doubting Shehzad’s abilities to single handedly win games for the Pakistani team over the years. His stylish drives, wonderful slogging, and perfectly-paced innings, more often than not, set the tone for the Lions’ lineup to post (or chase down) a big target with relative ease.

One of the most experienced pacers in the domestic circuit, Cheema forms a lethal bowling partnership with pacer Wahab Riaz. With 2 wickets against the Kolkata Knight Riders, he has the ability to bowl brilliantly in the penultimate overs of a game, and is one of the best in his team at this trait.

This is the first time these two teams are playing against each other. Both of the teams are new entrants to the CLT20 tournament.

This is a must-win game for both the teams as both of them would want to prove themselves to be worthy for the semi-final stages of the competition. KKR have already qualified to the semis from Group A, so the stakes are already high for the teams to win all their remaining group games.

Will it be a tactical battle of the captains? Or will it be a no-hold-barred, slog-fest?

What team will Hafeez field?

Most importantly, will the Lahore Lions roar out loud and win the game? Have your say in the comments below.