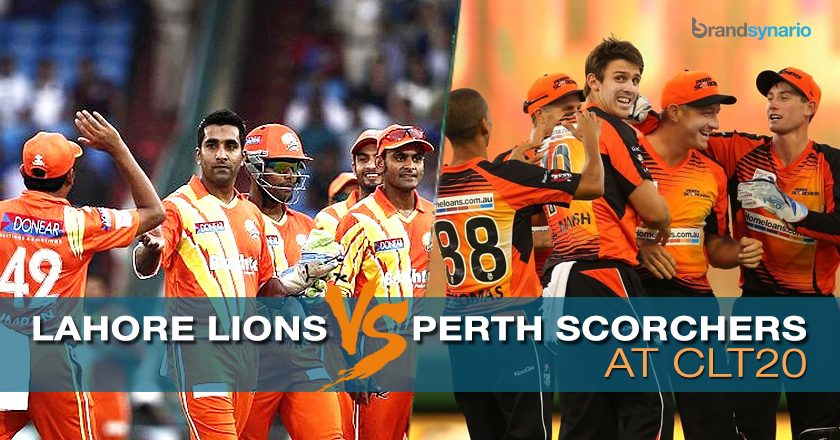 Resurgent Lahore Lions to test their mettle against the Perth Scorchers in their most important game yet!

They say that a lion runs fastest when he is hungry. That is definitely what we experienced on Saturday when the Lions from Lahore put up a valiant display against the Dolphins from South Africa to beat them by 16 runs in Match 14 of the CLT20 2014.

Batting first, the team, initially, struggled to put up runs on the board, but recovered well and put up a score of 164 for 5, thanks to a magical, match-winning innings by Umar Akmal.

Akmal scored a breathtaking 73 runs off 45 deliveries, an unbeaten knock which included five 4s and five 6s. The Dolphins put up a good fight, Robbie Frylinck putting up and amazing batting display at the death. But the team did not have an answer to the exceptional spin attack of the Lions, eventually losing the contest by 16 runs, their third loss in as many games, ending the Dolphins’ aspirations of progressing to the semi-final.

Up next for the Lions are Australia’s Perth Scorchers, who themselves are out of contention for the semi-finals of the tournament, after losing to MS Dhoni’s Chennai Super Kings by 13 runs in their previous game.

In a fiercely-contested tie, the CSK team scored 155 for 6 batting first, thanks to a match-saving partnership between MS Dhoni and Ravendra Jadeja. In reply, the Scorchers could only score 142 for 7, with captain Adam Voges scoring a neat 27 runs.

Group A has gotten very interesting following CSK’s win against the Scorchers. The Kolkata Knight Riders have already qualified to the semis, while CSK are strong favorites to qualify as the group runners up. However, if the Lahore Lions beat the Perth Scorchers convincingly, with a high run-rate, they would overtake the CSK and qualify to the semis.

But do the Lions stand a chance against the team that would be playing to save its pride? Let’s look at how our Lions fare up against the Perth Scorchers.

The playing surface at the M. Chinnaswamy Stadium is a batsmen paradise. But the same pitch has seen an incredible amount of effective spin-bowling, so the teams could line up with loaded spin options.

The Scorchers captain, opening batsman, and leading run-scorer, Voges is a player that leads by example. His batting is always calculated and he paces his innings based on the type of bowling he is up against. However, with a strike-rate of more than 120, you can expect some heavy hitting from him if the Lions’ bowling does not click in the opening stages of the innings.

A right arm fast bowler who can bat, Coulter-Nile has put in some handy performances for the Scorchers during the tournament. With three wickets in his two matches, coupled with a mature knock of 30 runs against the CSK, he has been one of the most reliable players for the Scorchers. With a bowling average of about 23 and a batting strike-rate of more than 140, the Lions must be at the top of their game to counter his effectiveness.

Former Pakistani international and an all-rounder of the highest quality, Arafat is the go-to man for Voges in times when he requires a break-through. His brilliant swing bowling has enabled him to pick up six wickets in the tournament with an average of 22, while his lower-order batting with a strike rate of about 200 has been a joy to watch as well. Yasir Arafat, if on top of his game, could give his fellow countrymen a run for their money!

The Lahore Lions’ middle-order mainstay, Saad Nasim proved that he has nerves of steel when he batted brilliantly against the Dolphins to set up a challenging total for the Dolphins to chase. His batting strike rate is almost touching 145, and his fruitful contributions make him the player who holds the teams batting together.

An amazingly talented cricketer who is finally fulfilling all the potential that made him one of the best young players the world has seen, Akmal has been a joy to watch in the CLT20. His batting-style has seen a consistency that was missing during his earlier days. Slogs, drives, cuts, pulls, perfect timing, this kid has everything in his locker, and he is the one player Scorchers would be wishing has an off-day against them.

A left-handed batsman with an ability to bowl slow left-arm spin, Mustafa Iqbal was the star of the bowling show against the Lions, picking up two vital wickets and fully utilizing the wicket’s inconsistent bounce and turn. Similar playing conditions are expected for the match against the Scorchers, and a similar bowling display would do no harm to the Lions’ prospects of qualifying for the semi-finals.

Like their two previous encounters, Lahore Lions are facing the Perth Scorchers for the first time in a competitive match.

The Perth Scorchers are already out of the tournament, while the Lahore Lions require a convincing victory to topple Chennai Super Kings off of the coveted second-position in the group standings and qualify for the semi-finals of the tournament alongside the Kolkata Knight Riders.

One team has nothing to lose. The other has everything riding on this game. You can expect the Lions to come roaring out of their den, and (hopefully) tear apart the Perth Scorchers’ line-up.

Will the Lahore Lions win this game? Or will the Scorchers ruin the Lions’ dream of qualifying for the semi-finals? Have your say in the comments below.