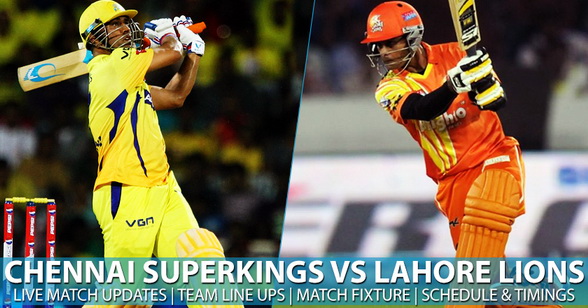 The Champions League T20 2014 is well and truly underway in India, with the best Twenty20 teams from India, Australia, South Africa, Pakistan, West Indies, and New Zealand battling out to be called the Club Champions of T20 Cricket.

Lahore Lions, under the stewardship of ex-Pakistan T20 captain Muhammad Hafeez, are the sole representatives of Pakistan, having qualified for the group stages for the first time after failing to qualify in the previous two editions of the event.

Lahore Lions are also the first domestic champions from Pakistan to make it into the group stages of the tournament, successfully qualifying for the group stages through the qualifying rounds, where they beat the Mumbai Indians from India and Southern Express from Sri Lanka.

The Pakistani T20 champions, Lahore Lions, played the T20 champions of India, Shahrukh Khan’s Kolkata Knight Riders, in their first encounter on Sunday, where they valiantly fought until the death, but could not register a win against the Kolkata side. Up next for the Lions are the odds-on favorites for the tournament, Mahendra Singh Dhoni’s mighty Chennai Super Kings, who are fresh off from an amazing victory over the Dolphins, beating them by 54 runs after setting up a mammoth target of 243.

The encounter takes place at the M. Chinnaswamy Stadium in Bengaluru, on Thursday at 7.00pm PST.

So how do our Lions from Lahore fare up against the Kings of Chennai? Here’s a look at what to expect from the exciting encounter.

The team line-ups are likely to be decided based on the condition of the pitch and the weather for this first-ever encounter between these two teams. The complete squad of both the teams is as follows:

Fresh from their amazing victory over the Dolphins, the CSK locker room would be buzzing based on their complete team performance. However, Suresh Raina put on an amazing batting display, scoring 90 off 43 balls, in an innings which included four 4s and 8 sixes. The dazzling display earned him the Man of the Match award, and he is the one to watch out for in the game against the Lions!

An all-rounder of the highest quality, with exceptional batting skills, brilliant slow bowling, and outstanding fielding abilities, Jadeja is a treat to watch on all fronts of the game and is surely going to be up for the occasion to face a team from across the border.

Although off-form at the moment, Ashwin is considered as one of the best spinners of the sub-continent, with his best performances coming mostly against the Pakistan Cricket team. His slow bowling action is a pain to deal with, while he has proved to be quite handy with the bat as well. The Pakistani batsmen should keep a close eye on how he performs during the match.

The very stylish talented opener has been in sensational form with the bat, having played a vital role in the team’s qualification through the qualifying round, while also playing a mature innings of 59 from 42 balls that enabled the Lions to post a respectable total of 151 in the allotted 20 overs.

One of the brightest spots in a squad filled with international players, Umar Akmal has long been touted as the best wicket-keeping batsman Pakistan has produced in a long time. His innings is usually filled with blistering drives and technically brilliant slogs, and like Shehzad, he is always a treat to watch.

One of the fastest bowlers in the Pakistani team, Wahab Riaz has the aggressive personality that marries well with his professional traits. His flowing bowling action and fast reverse swinging deliveries could prove to be quite a stringent test for the CSK batting line-up.

This is the first time these two teams are playing against each other. CSK are veterans in this form of the game and an ever present name in the tournament, while the Lahore Lions are the first Pakistani team to participate in this tournament.

It is going to be a truly remarkable encounter between the two teams from either side of the border. Expect fireworks when these two teams clash together tomorrow!

Have your say in the comments below.