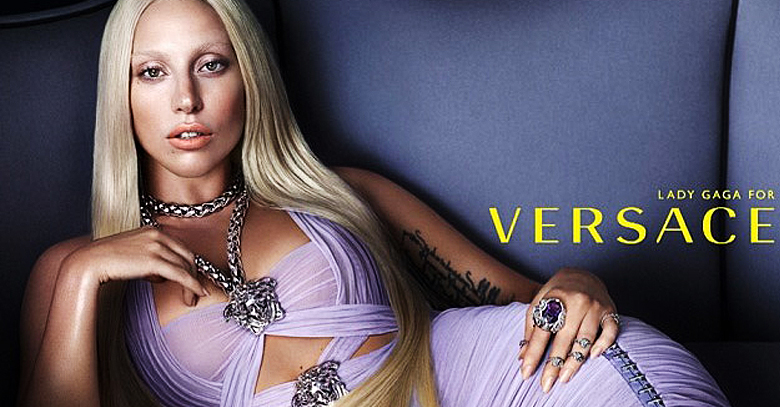 Versace has signed up Lady Gaga as the brand’s ultimate womanly personification. Versace has upheld a façade of womanly beauty with an immaculate stature, sex appeal and confidence.

The first of the Spring/Summer 2014 look from Versace featuring Lady Gaga showcases the singer in lavender and black Versace dresses.

Stefani Joanne Angelina Germanotta more commonly known with her stage name, Lady Gaga, is a world renowned American pop-singer, songwriter, activist, record producer, businesswoman, fashion designer, philanthropist, and actress along with a big fan of Donatella Versace. She openly expressed her admiration for the Italian fashion designer, with a song in her recent album dedicated to the brand and the designer named ‘Donatella’, a sonnet to all things Versace.

The singer looks like Donatella Versace as she poses for the new Versace campaign, shot by Mert Alas and Marcus Piggott.

Carrying waist-length straight, platinum-blonde hair, Lady Gaga reclines on a sofa in a pale lilac Versace dress and chunky silver accessories. The campaign has been named, Lady Gaga For Versace, for which the company has established the hashtag #VersaceLovesGaga.

“I am honoured that my friend Lady Gaga is the face of our new Versace campaign,” Donatella said. “I wanted to capture her true beauty and spirit in images that are elegant and alluring. She is like family to me, the embodiment of the Versace DNA.”

Versace’s brand personality reflects attributes such as being creative, experimental and fearless all of which are in much consistency with Lady Gaga’s personality.

Lady Gaga showed her gratitude on her g+ account by pronouncing that she is honoured to be a representing Versace.

As the new face for Versace fashion for spring 2014 dawns in the face of Lady Gaga, the fashion world can only look forward to see the daring pop star in beautiful floor length gowns, as well as in edgy femme fatale style mini dresses.