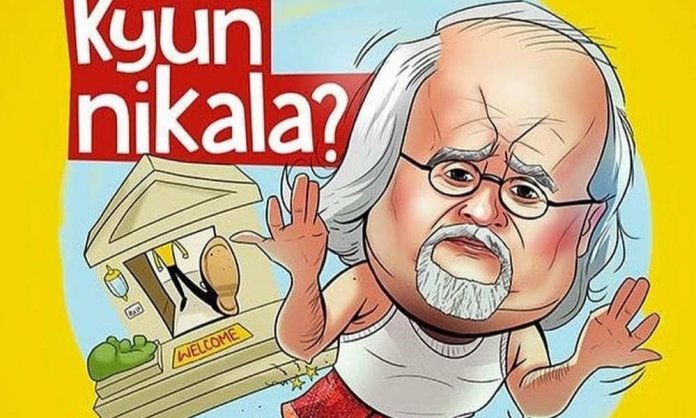 Kyun Nikala may have become the election slogan of ousted Prime Minister Nawaz Sharif but Anwar Maqsood claims he got the idea 8 months back while he was writing the play. He may or may not be right but one thing is certain – the phrase will make a place in the history of Pakistani dramas because it instantly clicks with the audience and makes them want to watch the play, being staged at the Arts Council.

The story of the play revolves around a Chaudhry (Sajid Hasan) who is currently in a no-Party zone, although he still stands by the sher. Every party wants to have him on board because he is a sure shot winner but he stands by his mentor Nawaz Sharif who is in jail. His Bengali Cook (Mohsin Ejaz) and confidante tries to reason with him, advising him to become part of a winning cause but he refuses because he still believes that his leader was kicked out of the PM house unceremoniously. Hence the name of the play since it revolves around the Kyon Nikala syndrome. Add a couple of party workers who try their best to coerce the Chaudhry into joining their party, a wife who doesn’t trust her husband, a lawyer who is as greedy as greedy could be, a couple of NAB officials who want to take him ‘home’ and a few undisclosed assets that can speak for themselves and you have a play that makes you feel happy on the current political scenario in the country.

The play’s major pull is Anwar Maqsood’s script who thinks like a young man and writes like a pro; every line where the audience is made to think of the meaning is his way of preaching the audience and although the play takes place before the General Elections, it looks current because the result doesn’t matter to the main characters. Sajid Hasan rejoins Team Anwar Maqsood after 1992 and you can’t think of anyone else in his place; his Chaudhry is Khwaja Asif, Abid Sher Ali,
Chaudhry Nisar Ali Khan and Shehbaz Sharif combined in one and the amount of research behind it is the beauty of the character. You can see him flirting with PTI ladies, talking ill of Zardari in front of PPP leader (Tanveer), be scared of his wife ‘Modi’ (Sara) and/or act like a current minister in front of NAB people. The dance he performs on stage is the highlight of his character as it shows to you where the Chaudhry spent his leisure time and with whom!

Mohsin Ejaz plays the Bengali who is not just a Cook but the Man Friday to the Chaudhry and he has the best lines in the play, even better than the Chaudhry’s at some point. Nazar Hussain and Raza played twin characters and excelled in both while new discovery Sara was convincing as the Chaudhry’s wife who loves to shop and eat. The set is good as well as the characters use the props to engage the audience such as the pictures and the exit door posing as the door to the other room. Dawar Mehmood’s direction needs to be applauded as well for he used both new and old actors like a pro and came out with a package that is exactly what the (theatre) doctor ordered. With such a planned comedy play being staged in Karachi, one feels sad for the upcoming films that might face stiff competition and fail only because Anwar Maqsood’s content is the king and no one can stand a chance in front of him.