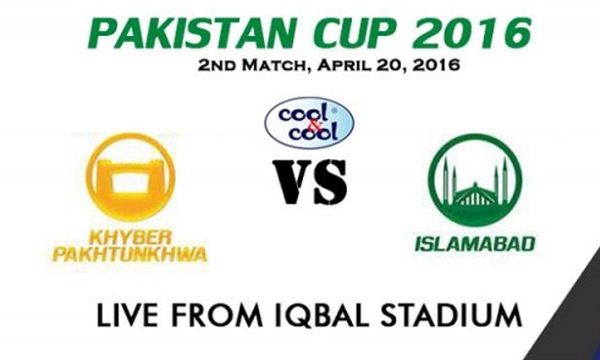 Islamabad XI in chase of a revised target of 201 runs in 43 overs (D/L method), stumbled at the start with the loss of three early wickets (9/3). Then came the skipper Misbah-ul-Haq for who rescued his side from collapsing.

Chasing 201 runs total was never too easy for Islamabad and the match ended in the last over with eight wickets down. Iftikhar Ahmad supported his captain from the other end with a 48 runs knock.

In the end, it was Shadab Khan that finished off quite well with 33* runs not out handy innings. Misbah ul Haq was given the Man of the Match award. Among KPK bowlers, Zohaib Khan remained at the top with three wickets but unfortunately ended being on the losing side. Earlier the entire KPK XI team got dismissed on 212 runs in just 46.1 overs against Islamabad XI; it looked like they were repeating yesterday’s action.

KPK started their innings very well with 76 runs opening stand provided by Ahmad Shahzad(31) and Fakhar Zaman(45); they were in the commanding position as skipper Younis Khan (61) was getting runs easily. But the three run outs cost them heavily, and rest of the damage was done by Hammad Azam who took three wickets in quick succession.

The middle order batsmen of KPK could not stay long at the crease; their innings was wrapped up at 212 with almost 4 overs to spare. KPK captain Younis Khan has won the toss and elected to bat first. In the second match of Pakistan Cup 2016, Khyber Pakhtunkhwa and Islamabad started their campaign at Iqbal Stadium, Faisalabad today.

The two most experienced batsmen and captains of Pakistan, Misbah ul Haq and Younis Khan are leading Islamabad and KPK side respectively;  they have to lead from the front to motivate the youngsters of their side.

Since the Cool & Cool Pakistan Cup 2016 is a 10 match championship, each team wants a winning start for not only gaining the psychological edge over others, but it will also help in making way towards the final.

Our first match of Pakistan Cup. Are you ready? Request you all to please come to the ground to support our cricket. Make it big@TheRealPCB

On the cards, Islamabad XI is a well-shaped unit having players like Kamran Akmal, Sharjeel Khan, Mohammad Sami, Nasir Jamshed and Hammad Azam while in KPK XI, they are likely to rely more on Younis Khan, Ahmad Shahzad and the leggie Yasir Shah.

The local cricket fans can enjoy this cricket match on economically priced tickets ranging from Rs. 100 to Rs. 200 as per PCB’s announcement. Unlike the first match that was a low scoring one, spectators in the ground and at home would love a high scoring game of 260+ runs with a thrill of boundaries for their entertainment.

The match started at 3PM local time and would be telecasted live via PTV Sports; the official broadcaster of Pakistan Cup 2016.