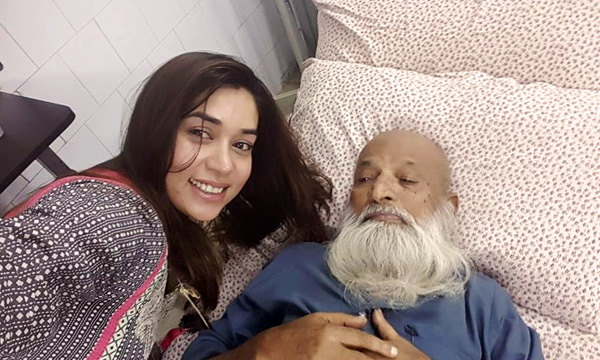 After causing an early morning havoc with her ill-timed selfie with Abdul Sattar Edhi, Komal Rizvi has given a long reply to all her critics.

“Edhi Sahab wanted to sit up for my pictures.. I quickly asked him to keep lying down… I didn’t want to inconvenience him even one teensy bit…while his beautiful wife was making funny jokes and talking about Sean Penn and Anupam Kher’s visit… I took tons of pics and selfies,” she continued on in her defense.

Komal has also threatened all her critics to delete their nasty comments otherwise they’ll have to face her wrath as she will personally block them all!

Actor turned singer Komal Rizvi is the latest celebrity to jump on the ‘visit Abdul Sattar Edhi at SIUT’ bandwagon. Komal probably thought it fun and harmless to take a picture with the humanitarian. Unfortunately for her, social media can be harsh and boy was it!

Negative comments started to pour in as Komal Rizvi posted a selfie with Edhi foundation founder Abdul Sattar Edhi. Komal Rizvi visited Edhi at the Sindh Institute of Urology and Transplantation (SIUT) where he had been admitted for check-up and his routine dialysis treatment.

As soon as she posted the pictures her fans started bashing her for the ‘happy’ pictures she took.

Earlier, the news of Edhi’s illness and admission at the Sindh Institute of Urology and Transplantation (SIUT) spread on Sunday morning last week but members of his family said there was nothing to worry about.

Edhi was taken to SIUT but only for his routine dialysis treatment, said hospital sources. He arrived at the facility on Saturday and was admitted on doctor’s advice. “It was a routine check-up and he is absolutely fine,” confirmed Anwar Kazmi, the spokesperson of the Edhi Foundation. He also informed that Edhi has been admitted at the hospital many times in the past.

If everyone had revolted against Komal Rizvi’s singing, we wouldn’t be seeing this day. #ControversialSelfie #Edhi

Dear Komal Rizvi, Your songs were enough for us already to curse you why you’re doing all these extra efforts.

Your views? No wonder if this is KOMAL RIZVI’s love for Edhi or another publicity stunt, what a loser. http://t.co/UyvbaaLqzG

Apparently #KomalRizvi decided it was more important to take a selfie with Edhi saab than to pray for his health. pic.twitter.com/mV2BkUGxWw

Komal Rizvi’s idea of taking that selfie with Edhi Sb is as bad as the idea of her singing for a living. She lost at both.

“When your frigging selfie is more important than the man on his deathbed.” PS. Edhi’s both kidneys have failed. pic.twitter.com/yOwpQU5kYb

Not all moments are for selfies. Not all selfies are for social media. #KomalRizvi #Edhi #WTHmoment pic.twitter.com/gpV0C107JZ

You have to draw the line somewhere. Komal’s selfie with #Edhi is embarrassing to say the least! #komalrizvi

Earlier, the team of Pakistani movie Wrong Number also visited Edhi Centre to meet the legendary humanitarian Abdul Sattar Edhi along with his wife Bilquis Edhi and the children at the center.