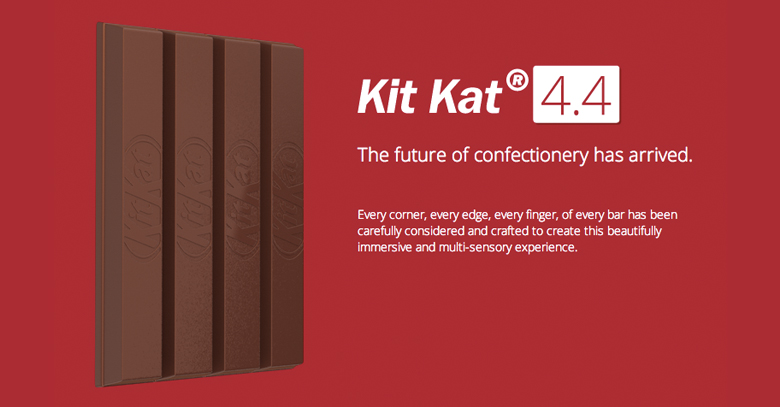 Just after Google officially announced that its latest operating system, Android 4.4, will be named after the famous chocolate brand Kit Kat, it seemed as if Kit Kat took the ‘strategy’ part out from their ‘strategic marketing’.

First it was the green logo robot on the chocolate wrapper, followed by an incomprehensible stream of futile attempts to resonate the chocolate’s positioning with that of Android’s.

Kit Kat for years has had the brand positioning of being the silkiest, smoothest and scrumptious chocolate wafer that is enjoyed equally by all age groups.

Kit Kat, the world recognized chocolate brand got into a cross promotional contract with Android last week. Both company’s official later confirmed that no money was exchanged in the deal as it was a cross promotion. Android, famous for naming all of its firmware updates after sweet desert starting in an alphabetic sequence, named the successor of ‘Jelly Bean’ (4.0), Kit Kat (4.4).

Kit Kat, on the other hand, recently revamped its official home page to strengthen the pact between the world’s most-used Smartphone Operating System, Android. Hence, repositioning the entire chocolate brand on the new slogan – ‘Confectionary Perfectionary ‘.

Kit Kat redesigned their website to make it more ‘tech-savvy’ by using  terminologies such as new features instead of new products and other terminologies including accessories, user experience, tech spec, in the packet and finally range with a closer look, on their website.

The change in lingo on Kit Kat’s website might confuse the good old chocolate eater but reference of ‘two mega bite’ for the two-finger serving size will definiely generate interest among the technology-freaks.

Kit Kat’s chief, in a publically made promotional video, is seen to claim repetitively the significance of ‘Confectionary Perfectionary’, by comparing the measurement of a Kit Kat bar with a technological spectacle. The website further uses more inexplicable technological terminologies that can only confuse the millions of Kit Kat fans across the world.

Kit Kat is a confectionary wafer chocolate, originally created under brand name of Rowntree in the early 19th century. In 1988, Rowntree was acquired by Nestle and ever since then Kit Kat is sold under its brand name all across the world except for America where Hershey’s owns Kit Kat’s brand name.

Therefore, critics claim that Kit Kat’s new website and its revised personification of the  chocolate bar makes even the most innovative minds stop in their tracks and wonder what in the world does Adjustable orientations,  Cloud based chocolate bars and mobility of the bar mean? Or what does maximum breakability has to do with the traditional taste of Kit Kat?