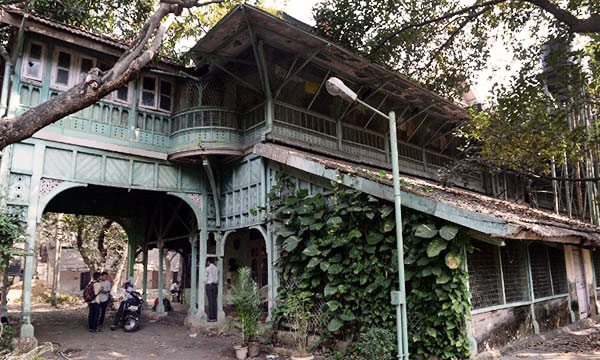 Hidden behind a blanket of trees at the back of a university in Mumbai lies the dilapidated, but once grand, former home of writer Rudyard Kipling.

Fallen branches, discarded chairs and even empty whisky bottles surround the 19th-century building, while bird droppings mar a bust of Kipling, author of such beloved novels as “The Jungle Book” and “Kim”.

“We feel cheated that such a beautiful monument has been neglected,” he adds, pointing to a rotting wooden post, precariously supporting the historic property in south Mumbai.

The “Kipling Bungalow”, as locals affectionately call it, is one of several mansions in the teeming Indian city, once associated with famous residents but now in ruin.

Nearby stands the former colonial home of Lord Harris, an ex-governor of then-named Bombay, widely credited with making cricket the most popular sport in India.

The gothic building housed school classrooms until four years ago, when pupils were moved out because the crumbling structure had become too weak and hazardous.

A few kilometres away in plush Malabar Hill sits the previously imposing residence of Mohammad Ali Jinnah, the founder of Pakistan and its first governor-general.

The stately home hosted critical talks between Jinnah and India’s first prime minister Jawaharlal Nehru on partition of the subcontinent, but today its downtrodden appearance belies its historical significance.

“The Kipling Bungalow is just a very sad reflection of bureaucratic hurdles… creating the death of a historic building,” renowned architect Abha Narain Lambah, who specialises in conservation, told AFP.

The wood and stone structure, its green paint peeling, is situated on the grounds of an art school, whose first principal was John Lockwood Kipling, Rudyard’s father.

Built in 1882, 17 years after Rudyard was born, the house was home to Lockwood Kipling and subsequent deans until the early 2000s, by which time it had sunk into such disrepair that it was rendered uninhabitable.

“We feel that Lockwood must have had Rudyard stay here and write so we call it the ‘Kipling Bungalow’,” explains Mishra, who wants the Maharashtra state government to restore it without delay.

He says officials plan to turn the building into a gallery exhibiting students’ work and that of decorated artists, and have issued a tender for the contract.

The building has been caught in a tug-of-war between the college and the government for years over what its restoration should look like, but Mishra hopes renovations will finally start in around six months.

Maharashtra culture and education minister Vinod Tawde failed to respond to repeated AFP requests for comment on the issue.

A short walk away, work has already begun on the former Mumbai residence of batsman and acclaimed cricket administrator George Harris, who was governor of the city from 1890-1895.

Harris captained England and during his tenure on the subcontinent “did much to lay down foundations for the expansion of the game in India”, according to Cricinfo website.

A Mumbai inter-schools cricket tournament called the Harris Shield is testament to his legacy, but his former home was allowed to come close to collapse before long overdue maintenance work started.

The three-storey mansion, part of a public school, was out of use for three years until renovation began in June, and presently stands gutted, surrounded by bamboo scaffolding.

“It was basically falling apart and became too dangerous to be inside,” the school’s principal, Mohan Bhogade, told AFP.

In arty Kala Ghoda district, a 147-year-old mansion, formerly the resplendent Watson’s Hotel, frequented and written about by Mark Twain, is a ramshackle shadow of its former glory.

Now called Esplanade Mansion, it shows no signs of being restored despite ten years having passed since it was placed on a global list of endangered monuments by the New York-based World Monuments Fund.

Watson’s, completed in 1869, is believed to be India’s oldest caste-iron building and was the hotel of choice for colonialists and visiting dignatories during the British Raj.

Accoring to legend, the hotel went into decline after Indian industrialist Jamsetji Tata built Mumbai’s iconic Taj Mahal Palace because he was denied entry to Watson’s, which had a “Europeans-only” policy.

Today the crumbling structure houses a medley of dark cubbyhole offices. A lack of funds and arguments between tenants and city authorities have been cited as contributing to its descent into ruin.

“The idea of heritage has just evaporated,” says Naresh Fernandes, author of “City Adrift: A Short Biography of Bombay”.

AFP contacted a number of officials at the Brihanmumbai Municipal Corporation, regarding the Watson’s Hotel and the Harris building, but none were available for comment.

Jinnah’s house has been embroiled in a long-running legal dispute over ownership between his daughter, India and Pakistan. It lies empty in thick forest behind a padlocked gate.

Lambah doesn’t believe the buildings owe their dilapidation to any sort of colonial antipathy, citing well-maintained British-era relics like the Bombay High Court and the former Victoria Terminus train station.

Islamabad to Have Biggest & Most Advanced IT Park