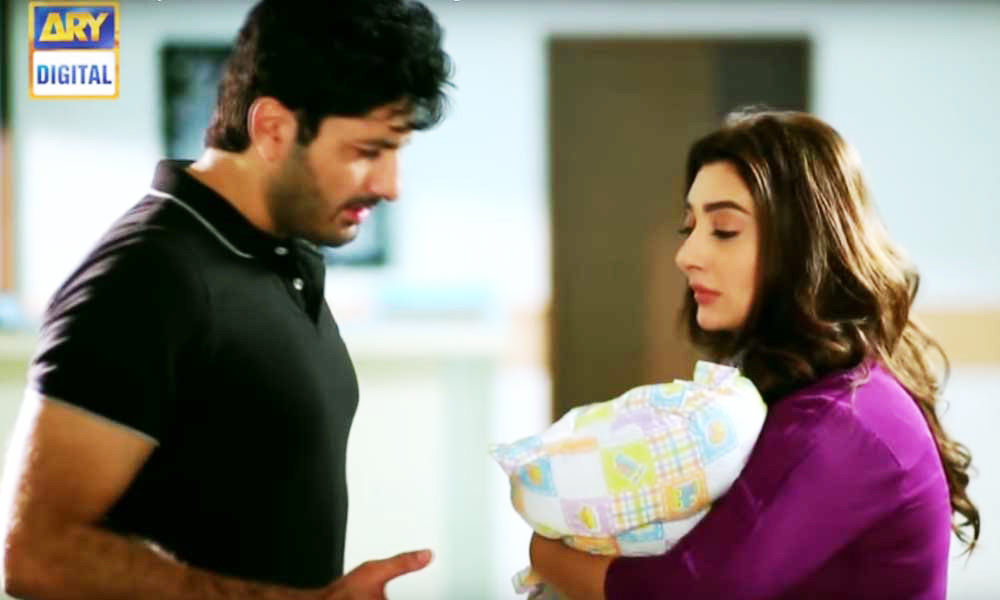 The episode we had all been waiting for finally hit our television screens on Saturday and left us all in awe! The drama finally connected the dots where the trailer had left us hanging and it is safe to say that just as we predicted, Khuda Mera Bhai flaunts an extraordinary plot and a powerful storyline. With a slow start to the show, the latest episode highlighted some vital issues wth stellar performances and superb direction skills. The latest episode explored in detail, the very emotions that the family felt upon having to welcome a transgender child into their family. The inspiring thing about this episode is that it explored the emotions of just about every member of the family that was affected by the birth.

Let’s talk about the 5 most defining moments in the latest Khuda Mera Bhi Hai episode. Just reading about it will give you goosebumps!

1. The bone of contention: ‘transgender baby is born!’

This is the very moment that will change the entire momentum of the drama series and will help determine new paths for all the characters portrayed. We see how one single revelation about the baby changes the surroundings dramatically. What was supposed to be an auspicious occasion turns into a wildly horrifying one for the family.

We see the subtle ways in which the relationships take a turn for the worse as each family member finds different ways to cope with the baby’s birth. What was supposed to be a memorable occasion turns into a wildly horrifying one for the family. We see the subtle ways in which the relationships take a turn for the worse as each family member finds different ways to cope with the baby’s birth. The cliched ‘Log Kia Kahengay’ perception runs deep here.

2. The loss of support

As soon as the baby is born we see the characters worrying about themselves, their reputation and what exactly the society would think or say about them. Mahagul’s mother in law, who is seen as the antagonist right from the start, plays an equally unsporting role in this particular dilemma. Her dialogues are crisp, harsh, and extremely direct! She opens the young couple’s eyes to the staunch reality that they must face. I found her character’s reaction completely on point- this typically highlighted how remorse times brings out the worst in people.

A scared mother-in-law who felt vulnerable to the unforgiving clutches of the society that would forever judge her and her family for welcoming a transgender baby within their midst, even if the baby was her own blood and flesh. Isra Ghazal’s flaunted some mind-blowing acting skills.

‘Khuda Mera Bhi Hai’ ARY Digital Upcoming Drama Highlights a Taboo Subject that No One Dared to Talk About Before!

This is another extremely pragmatic point that the drama has portrayed. It speaks volumes of the very difference between a father and a mother. It explores the feelings that the two individuals have over the birth of a child. Where the mother develops a deep bond with her baby and herself long before the baby is born, a father needs time to develop that bond.

As seen in the drama, the father refuses to even hold the baby. He feels no love for the child and by the end of the episode, he feels no remorse in giving the baby up to the transgender clan.

The drama explores how a strong-headed and independent woman such as Mahagul was so deeply shaken by the birth of her transgender baby that she could not fathom the courage to resist her family who wanted her to give up on her baby. Throughout the drama we have seen her as the epitome of justice and strength, to see her in such a heart-wrenching condition was quite out of the ordinary during this drama series.

5. The constant battle between abandoning or giving up on their own flesh and blood!

Here we see a stark reality that the society imposes upon families. Ayesha Khan played the part of a grieving mother quite well. We are shown how indecisive and reluctant she actually was when she was asked to give her baby in the hands of Hijra community. By the end of the episode, we see that the separation from the baby and the guilt of giving up on her son had taken a huge toll on her health. What will Happen Next?

Steering us away from the cliched and sappy romantic tales, Khuda Mera Bhi Hai did hit the right chord, but did it deliver what it promised? Not yet. What will happen next is what we all can’t help but wonder?

Will Mahi take a stand for her own child or will she be backed down by the society? Will the intersex child be brought up by the Hijra community and not accept her own mother once he grows up? Let’s wait and watch.

Khuda Mera Bhi Hai ARY Digital Drama Episode 2 Review: Despite All the Hype, the Drama Fails to Engage the Audience

Overall the latest episode was well received and I believe a lot of people cannot wait to see what steps Mahi & Zain will now be taking to protect their only child? Watch the next episode at 8.00 PM this Saturday on ARY Digital

Watch promo of the upcoming episode below: