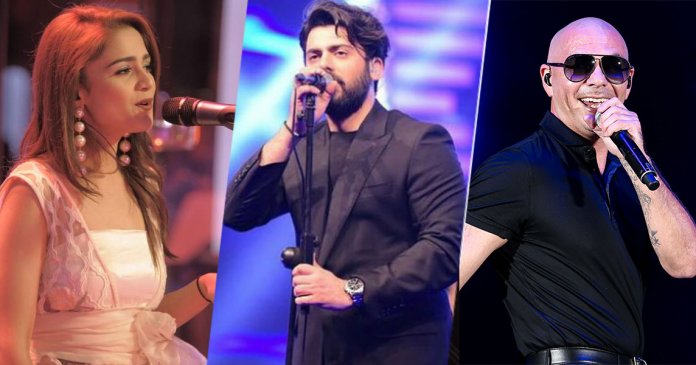 The most awaited song of the year is here and is a super-duper hit! #KhelDeewanoKa PSL 4 official anthem Voiced by the heart-throb Fawad Khan and written by the talented Shuja Haider finally is nowhere!

The song is catchy, fun, funky, lively, and everything we were expecting it to be. Fawad never fails to win hearts of hundreds of thousands of his fans all across the globe.

IT HAS ARRIVED! 🎺🎺🎺
The official anthem of the #HBLPSL 2019 by @_fawadakhan_ ft. Young Desi, #KhelDeewanoKahttps://t.co/P4nSglVOpU

The highly anticipated PSL 4 anthem was anticipated since the news of Fawad replacing Ali had broken out.

Head of Marketing PCB Sohaib Sheikh has made the following statement at the HBL PSL anthem launch.

With the first three HBL PSL anthems, Ali Zafar did a fantastic job in composing and singing some memorable tunes.

Keeping up the same benchmarks this year we are proud to announce that Fawad Khan has sung our new anthem with a surprise performance by Young Desi.

Composed and produced by Shuja Haider, this anthem will surely rock all the fans to its beat, Khel Deewano Ka.

Pakistan Super League teased what’s in store for us on their official Twitter account with the caption:

‘The countdown begins for #KhelDeewanoKa. Are you as excited as we are? Stay tuned!’

The countdown begins for #KhelDeewanoKa. Are you as excited as we are? Stay tuned! pic.twitter.com/si7LvS7wBh

We are looking forward to seeing Fawad perform the anthem live at the opening ceremony of PSL 4 in the UAE along with Young Desi, Junoon, Aima Baig, Boney M, and the international powerhouse and sensation Pitbull!

Keeping up the tradition of the last three seasons, the #HBLPSL is set for another grand opening ceremony.
The Dubai International Stadium would play host to a star-studded evening on 14 February 2019.#KhelDeewanoKa
More Details ▶️ https://t.co/bBYKLBIFkv pic.twitter.com/EkLJak2z61

What are your thoughts about the new anthem? Share them with us in the comments below.