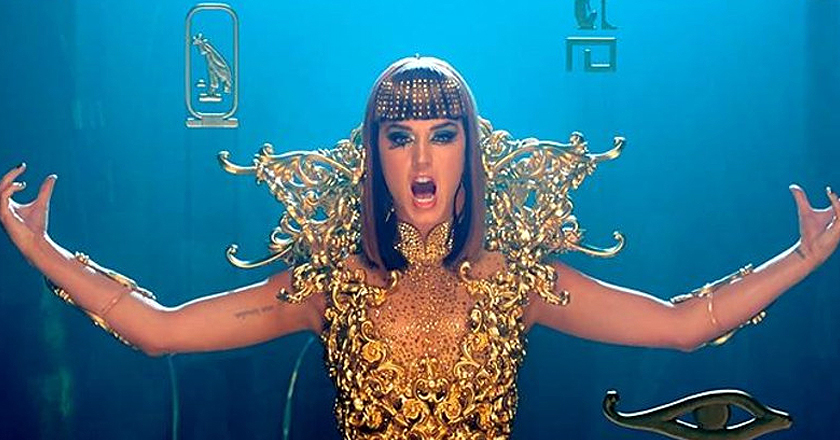 Katy Perry has recently released her new single ‘The Dark Horse’, and the music video has become the talk of the town but not in good ways.

The music video has caused a stir within the Muslim community across the world that is now accusing Katy Perry of being disrespectful to Islam and has termed the video as blasphemous.

Protest against the video has begun on the social media and the pressure is back on YouTube to take the controversial video down from their website. The video shows Katy as an Egyptian princess who is looking for her suitor and those who are hopeful shower her with gifts.

One after another the suitors arrive with presents which offend the princess, and the men are turned into sand by lighting Katy shoots at them through her fingers.

Unfortunately for Katy one of these men that she disintegrates can be seen wearing a pendant that says ‘Allah’ on it. This act was taken as an insult to the Muslim by no less than 40,000 protesters, who have signed the online petition, from various countries including Saudi Arabia, Australia, Pakistan and Bangladesh.

Shahzad Iqbal the man who started the petition has reached out to Muslims to help him in pressuring YouTube to take down this video immediately. He believes Katy Perry’s act of disintegrating a man wearing such a pendant shows her overpowering the believers of Allah which is no less than blasphemy.

“Using the name of God in an irrelevant and distasteful manner would be considered inappropriate by any religion”, Mr. Iqbal added.

Many who signed the petition has expressed their disappointment; they believe that music industry should look into the content before it is launched on a global scale.

Bilal Khan from Birmingham is one of the many who has raised his voice against the video; he has blamed the music industry for allowing such videos to go on air without any check.

“Absolutely disgusted at the music industry for allowing this to happen, music should be about spreading love not hate,” he said.

This is not the first time that such content has been posted on YouTube, The website has been banned in Pakistan because of such content that is deemed disrespectful to the Muslims and if this continues it can result in a permanent ban of YouTube in other Muslim countries as well.