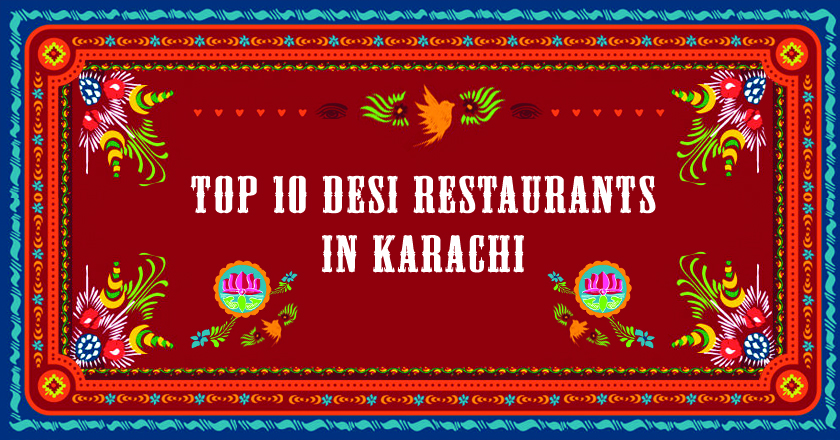 The supremacy of Karachi’s cultural culinary landscape is undeniable. From casual cafes to roadside Dhabas, classic fine dining to the city’s hawker food, Karachi appears to be the ultimate paradise for food lovers who can not get enough of the succulent delicacies the city offers.

Check out the exclusive list of the top ten restaurants whose location and details ask for the most. While the Holy Grail of all Desi dishes appears to be none other than the colorful, aromatic, spicy, hot Biryani, it is undoubtedly Karachiites all-time tantalizing treat.

The town’s Biryani Center franchise tops the list of the most popular desi restaurants as per telephonic inquiries. With its dynamic menu ranging from Kofta Biryani to Vegetable Biryani, Tikka to Haleem; the restaurant has emerged as the city’s most wanted place to satisfy their insatiable cravings. Lagging behind by a small margin to Biryani Centre, is Karachi’s historical and authentic biryani brand, Student Biryani as the runner-up on the list.

From a humble roadside service to now a global food chain, the 46- year-old eatery is still the favorite of many for its biryani’s secret premium ingredients and its luscious piquant taste. Shaheen Shinwari wins amongst the rest in the list by being apparently unbeatable with its Karhai offerings, Afghani boti and Chapli Kebabs. In no time, it has become popular amongst Karachi food lovers and has ratings amongst the city’s shinwari restaurants.

Famous for its sophisticated and hygienic fine-dining environment, the towering four-storey food factory has been long dominating the cut-throat barbecue business and draws throngs of people to Clifton’s Bilawal Chowrangi every day. Its Reshmi Kebabs, Mutton Ribs and Katakat are claimed as amongst the must-try items. Half way down the list of the most asked about desi restaurants is Karachi Foods. Relatively easy on the pocket, it houses not only the cultural cuisine but Chinese, Sea Food and Fast Food as well. Ranking 6tth on the list, Chacha Jee seemingly retains the traditional fresh flavors in its menu, thus establishing itself as a popular food stop for people who visit malls to enjoy a quick feast of Spicy Chola Chaat, Pani Puri, Traditional Thali or Behari Tikka. With a snazzy logo and bubbly brand name, Bholu has emerged as a pocket-friendly, one-stop hygienic solution to satisfy your yearning for chutney-filled, soft and succulent bun kebabs.

It is claimed as a heaven for the office-goers at I.I Chundrigar Road who want to grab a quick bite of homely meals like Dal Chawal and Qeema Paratha during their lunch hours. With is “charapi” and “gao-takka” ambiance, Alhabib has rapidly won the hearts of the foodies with its flavorsome Karhai and Handi specialties.

People ditch eateries nearby just for a visit to Al-Habib on Super Highway, to get the quintessential desi meals in its convivial, breezy environment. Locate at National Highway at Malir, Anwar Baloch Restaurant too lures people with its infamous Karahi dishes. The place is claimed to be always alive with crowds of people, making it difficult to grab a place, even in the early evening. If there is one dish that unites all desi lovers, that is the masala-packed, ginger topped, fiery daigh of Nihari with fluffy white Nans.

Surprisingly, Zahid Nihari is the sole Nihari restaurant that wins in the list, defeating popular names like Waheed, Ghaffar and Sabri Nihari Walas.