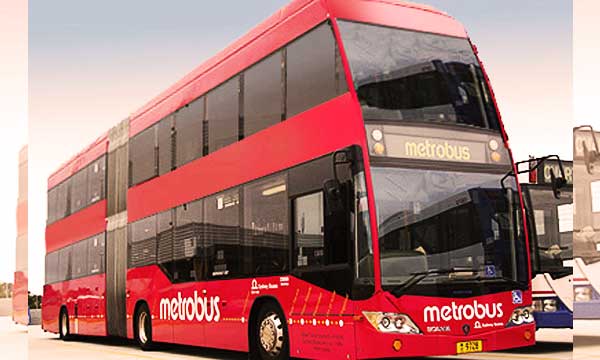 The Culture Department has agreed upon initiating a double-decker bus service in Karachi by July this year for the tourists to travel the city. The double-decker bus will be en route from Mohatta Palace to the Old City area of Karachi. It is safe to assume that the city is still quite unknown to its people which is why the culture department has taken up the responsibility into their own hands.

The announcement of the project was made by the culture and tourism secretary, Niaz Abbasi on Wednesday in the culture department meeting; the bus service is to kick off in July this year. Abbasi, while discussing the proposed projects noted that there are 2 schemes in line that are being launched; with one being the double-decker bus service and the other being the purchase of two-50 seat boats for the tourists.

Revealing more about the boat scheme, Abbasi said that one boat will reside at the Beach Site near Karachi Port Trust (KPT). The boat service will show the visitors sea-sites of Karachi whereas the other boat will be operational at Sukkur, near Labe Mehran. This boat ride will be en route from the River Indus to Rohri.

Abbasi also disclosed the opening of six archeological and cultural monuments, out of which two centers will be established in Karachi and one each at Makli, Moen Jo Daro, Bambhore, and Kot Diji.

The Chief Minister also urged the authorities to remove all the encroachments around the heritage buildings in order to restore them to public.

Lahore’s Double-Decker Buses to be Launched on the Roads