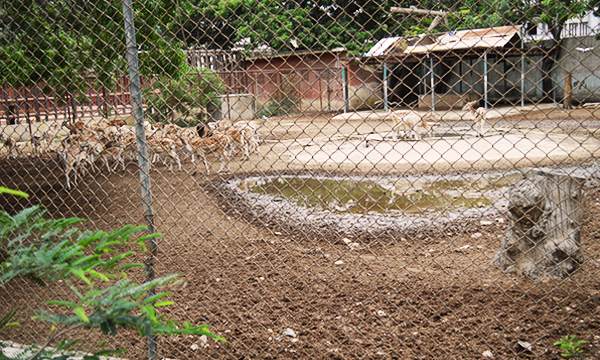 Karachi- many love the city for its buzzing nightlife and the scenic (littered) beaches, but there is no denying the fact that the value of life is, well, let’s just say, ‘ little’. Every day is a struggle in the race of survival of the fittest. Somewhere between the struggles of the human life and the present circumstances, the value of animal life has been muffled. The despondent condition of the Karachi zoo serves as proof of that. While zoos all over the world are generally striving towards the best animal care and artificial habitat, Karachi Zoo is fighting to keep the animals breathing.

One stroll around the place and you get a sense of disappointment, hopelessness, and great misconduct, just by the surroundings.

We Pakistanis seem to have a genuine disregard for cleanliness. ‘Paan’ splatters are a common sight in the zoo. Not to forget that plastic bottles can now be found ‘hanging around’ on trees too.

The ponds in the zoo are a basic necessity for animals like crocodiles and the geese, yet used bottles and soda cans float freely in them as if they were a part of the natural habitation. Though the blame for the filth is on the visiting spectators for violating the home of the animals with trash, the zoo staff is not entirely innocent. The lack of cleanliness can be seen everywhere; the horses are mostly splattered with mud, the water in the ponds is rotten and reek of unfiltered water and faeces. The stench is utterly unbearable!

The questionable green water reflects the height of ignorance of the zoo staff. One popular case was of a lioness giving birth to four cubs and dying within four days; similarly, a jackal gave birth to three pups and after their deaths were allegedly reported as being eaten by their mother.

View some of the pictures of the despondent state of Karachi Zoo below:

The past heatwave endured by Karachi’s citizens and animals took the lives of 8 innocent animals at the zoo, clearly showing that there were very few precautions taken by the authorities in charge.

According to them, a slab of ice is enough to cool the animals during the treacherous daytime whereas they themselves constantly consumed large amounts of water. Knowing that leaving things in their hands will be of no use, a group of volunteers decided to take matters into their own hands. After have a meeting with the officials at the zoo, a group of 15 people went to the Karachi Zoo early Sunday morning, pulled on a pair of gloves, and got to work!

Peshawar’s First Ever Zoo to be Launched Soon

They cleaned around the office, the animal cages, and worked our way up to the canteen. However, it was not an easy task- The zoo is mostly crowded on Sundays as families are out and about having picnics, bringing the young ones to be entertained.

The purpose of going on a Sunday was making people aware of the importance of keeping the zoo clean, and why the animals are an important part of our survival.

In order to do so, small stalls were set up at different entrances with a sign reading ‘Project Hayat’. While a few of the volunteers gave awareness to children and adults, the others roamed around the zoo picking up trash that was thrown, despite a dust bin being available at every corner of the zoo. Unfortunately, the citizens who came to enjoy their evening could only stare with big grins on their faces, thinking why waste time picking up trash when it was known that someone else will walk by, and will litter anyway. Still determined to make a change and a difference, they worked on. Feeling hopeless, it became apparent that no impact was made on anyone, but just then, two little kids came forth, asking for a plastic bag, a pair of gloves, a mask and started helping out. It was more than delightful!

One of the children was a worker at the zoo. He helped operate one of the rides in the play area earlier and when he saw people working, he came running up, asking if help was needed. Isn’t that inspiring? However, upon the most recent visit to the Karachi zoo, it was revealed that the zoo authorities have started to take notice of the filth and the dirt while the zoo staff is now making commendable efforts to keep the surroundings clean.

The ugly truth that we all fail to accept is not the incompetent zoo authorities but the visitors who litter the most. Is no one willing to give up their day off to pick someone else’s trash?

It is urged to all of you not to litter, rather treat it like your home, come forward and actually make an effort.

What do you think of this article? Let us know in the comments below.