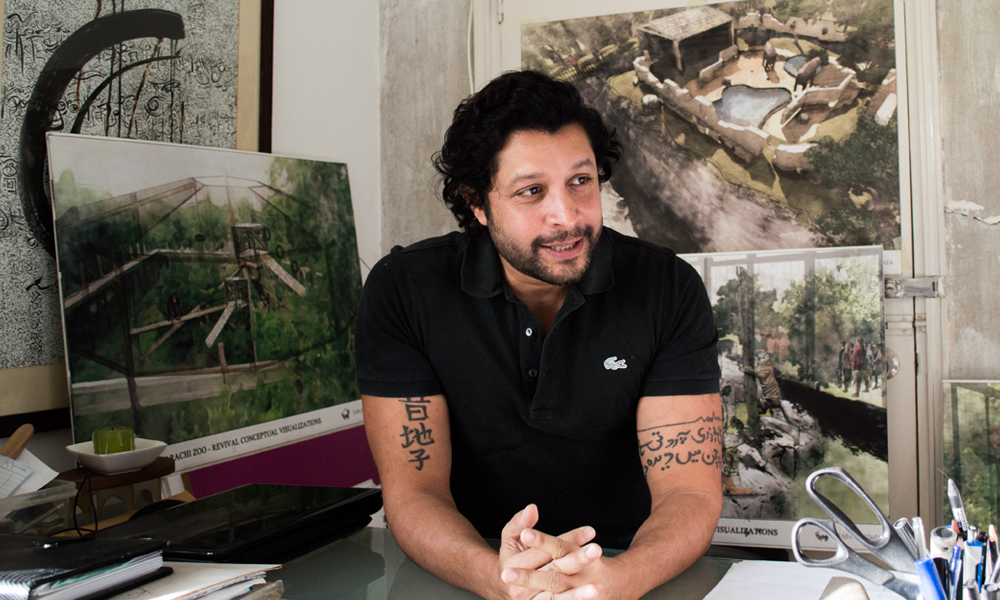 The Karachi Zoo, built in 1878, is the oldest zoo in Pakistan. Spread over 33 acres, “it’s an important piece of Karachi’s heritage and urban history “ states Zain Mustafa, the Design Director for the Zoo Revival project. It is part of the 20 projects earmarked for the general beautification of the city by the CM Murad Ali Shah. Brandsynario met up with Zain at his studio to get some exclusive insights on the project.

“ When you think of beautification, one thinks more of street lights, billboards, better roads etc. It was Samar Ali Khan, PTI MPA, and architect who suggested including the zoo as part of the beautification projects. It is like a living organism, a gorgeous oasis in the heart of the city in Garden East.  It has over 2000 trees, of which almost 400 of them are over 150 years old.  This project was born at the government level but trickled down to me when they were looking for someone who was an architect with a passion and empathy for animals.” Watch what Zain had to share about redesigning of Karachi Zoo here!

CRITICISM SURROUNDING THE ZOO AND CONDITION OF THE ANIMALS

The zoo has received criticism in the past on the poor treatment of animals resulting in deaths and poor sanitary conditions. However, Zain said that his first visit was actually an eye opener. Instead of seeing starving, sickly animals in a barren environment, he was pleasantly surprised to see the zoo management doing its best given the meager resources they had to work within. “The concept of zoos is changing around the world. Some have converted to safaris, animal enclosures or simply shut down. Here the Karachi Zoo is being designed with crisis management in mind, shutting it down is not an option. The animals need attention. “

Zain feels that the role of the zoo as an educational institution needs to be emphasized.  “ The zoo gets a lot of footfall, with the launch of the project we are also looking at increasing the diversity of the footfall. When you have a different set of visitors, they can learn from each other. “

“By giving information about the animals, the way they live, empathy can be created “

THE MOVE FROM CAGES TO INTELLIGENT ENCLOSURES

What visitors will expect to see once the project is complete is a welcome change – doing away with cages and moving towards what Zain terms as “ a smart home setup or intelligent enclosures”.

“Enclosures are normally inspired by a species natural habitat. It will be landscaped, and the animal will have different places to occupy within the enclosure according to the season. It will also be given dark and light spaces, toys, movable furniture etc. The Rubix cube inspires the design, with different combinations for the animal within keeping it psychologically happy and free from boredom.  WE will also be working on enrichment programs for the animals that will include keeping their hunting instincts alive.”

Whilst most cages will be removed, for some animals like the monkeys, open roofs are not possible but larger spaces and jungle gyms will be put into place. FUNDING FOR THE PROJECT In terms of private funding, the corporate sector has also shown interest in funding the project. The idea is to adopt an animal or enclosure.  Zain further adds, “ I will tell them how much it will cost to maintain the animal annually as well as provide a human resource from their side to look after the animal. In this way, there is a public and private partnership in the zoo management.”

“No particular zoo is being replicated. There is a common misconception that the Karachi Zoo is going to magically transform into the Singapore zoo on a budget of 15 crores. That’s just not possible! “

Zain mentions emphatically.  “Budgets aside, the Singapore zoo is suited to its people and culture, we need to adapt practices and designs to ours” Zain’s team spent months studying 10 major zoos of the world and applied their learning’s to the project.  They have also been lucky to receive support from some of the most famous zoos in the world.

“ The Singapore Zoo administration has offered to provide us with expertise. We also have access to Born Free Foundation in the UK, who has offered to come on board to help us. From The Bronx zoo, we have a gentleman who used to manage it, he is a friend of one of the people on the technical team consortium who managed to bring him on board. “

Given the funds and access to international expertise, the Zoo redesign team plans to create its own module in place and use it to replicate the project to other zoos in Pakistan. EMPLOYMENT OPPORTUNITIES THAT MAY ARISE FROM THE PROJECT

Zain is optimistic that more cafes will be included in the new infrastructure, enclosures will need more staff and a souvenir shop will also lead to creating additional jobs.

TIME FRAME TO COMPLETION AND CHALLENGES

The concept of the project has been approved and according to Zain, a large chunk should be completed by the end of the year. The entire project will take place over 3 phases and over a 2- 3-year time span. The project has luckily faced negligible challenges. “ It is strangely blessed. We have received great support from the government bodies –The CM’s office and the KMC as well as the zoo management. “

“ We have to bring the profile of the Zoo back up. We hope that through this project the animals will get a place of dignity – it becomes a place where everyone can visit safely, have a good day whilst and enjoy seeing the animals as part of an educational process”.